A year-to-date review of the monthly Statistics Canada Labour Force Survey (LFS) shows us that the representation of women in the construction labour force is in decline, not only as a percentage of the overall workforce, but in real terms as well.

The participation of women in construction peaked in 2018, accounting for approximately 13% of overall industry employment in both on- and off-site occupations. With nine months’ worth of 2019 LFS data collected, that share has declined to 12.3% of total industry employment. This comes as the number of women employed by construction establishments has declined to 178,360 women from 186,370 in 2018.

In part, the percentage decline of women is attributable to men entering the industry’s labour force at a faster rate. A year-over-year comparison shows that Canada’s construction industry added a net total of 24,100 new jobs since 2018. The number of men employed increased by 32,100, whereas the number of women employed in the industry decreased by 8,000. There are now 1,270,440 men working in the construction industry in both on- and off-site occupations, compared to 1,238,320 in 2018.

After years of stagnation, the number of women employed in direct on-site occupations increased to 51,070 (+10%) in 2018. While the number of men also increased, it did so at a much more moderate pace, climbing to 1,048,290, or increasing by approximately 1%. As a result, tradeswomen now account for approximately 4.7% of the total on-site trades and occupations.

BuildForce estimates that direct on-site employment for women will be roughly consistent with 2018 numbers. Therefore, the declines are largely expected to be departures from administrative, management, and other support-related occupations. On-site employment should be relatively constant, in part due to strong construction demand growth in markets such as British Columbia.

If these declines turn out to be proportional across the board, however, the results will be disproportionately felt by the residential sector and in the construction of commercial and institutional buildings, where approximately 69% of tradeswomen choose to work.

Another interesting trend worth noting is that the employment declines among women in construction aren’t evenly represented across all provinces. The LFS shows that the number of women working in the industry is up by 16% in British Columbia, 15% in New Brunswick, and 0.2% in Manitoba. It also shows that the participation of women in the industry is greatest in Alberta (16%) and British Columbia (15%), and lowest in Quebec (8%) and Nova Scotia (9%).

The numbers for on-site trades and occupations tells a similar story, which shows us that industry progress to improve the recruitment of women into the industry has been mixed, and in some parts of the country, regressed in recent years. 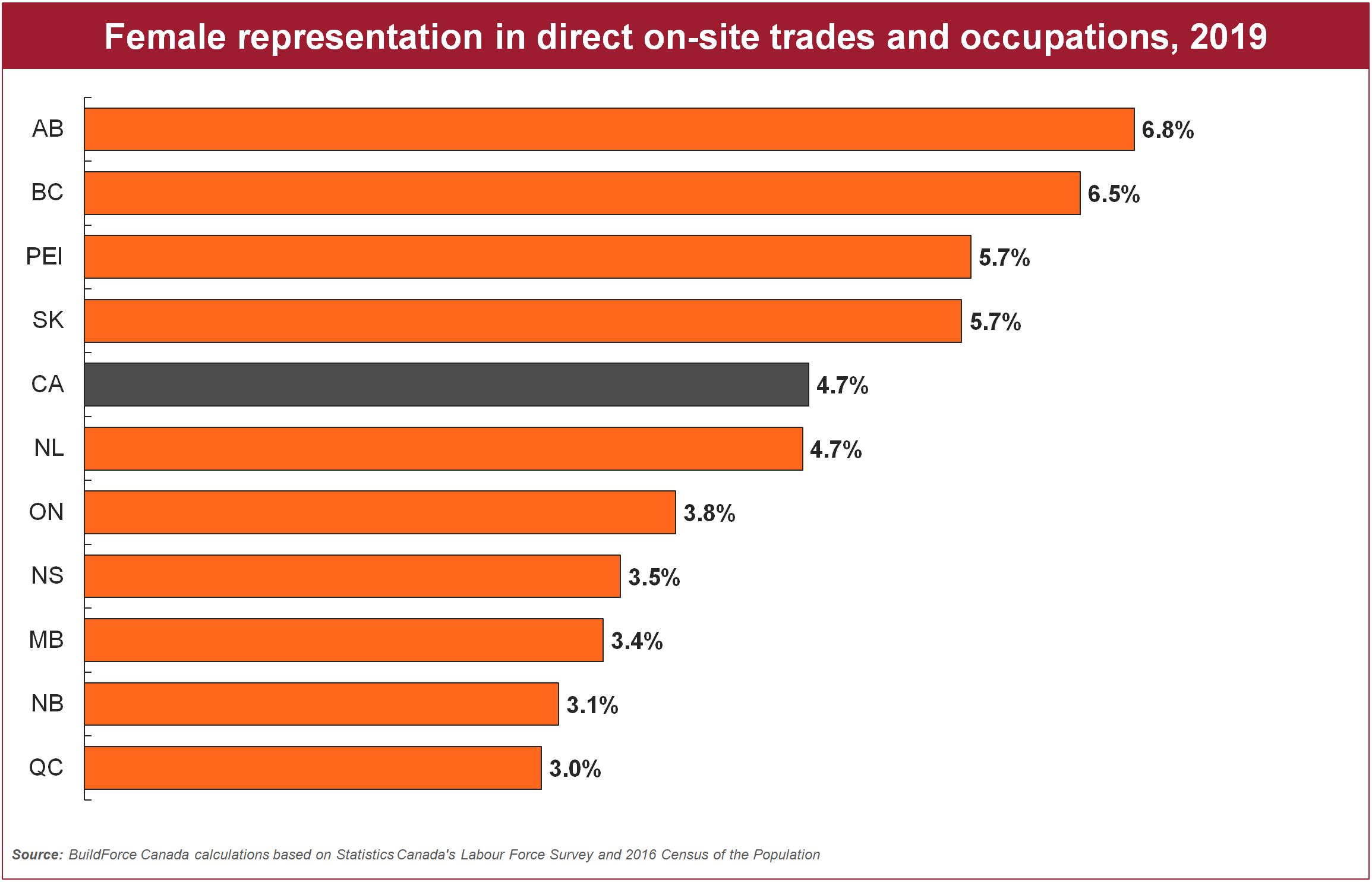