Data from Statistics Canada’s Labour Force Survey (LFS) for the month, which was collected during the week of January 10 to 16, show an industry-wide drop of 56,300 workers on an unadjusted basis. January 2021’s total industry employment of 1.328 million is a decline in employment of 4.1% compared with the month previous, and a drop of 4.2% – or about 58,100 workers – compared with January 2020. 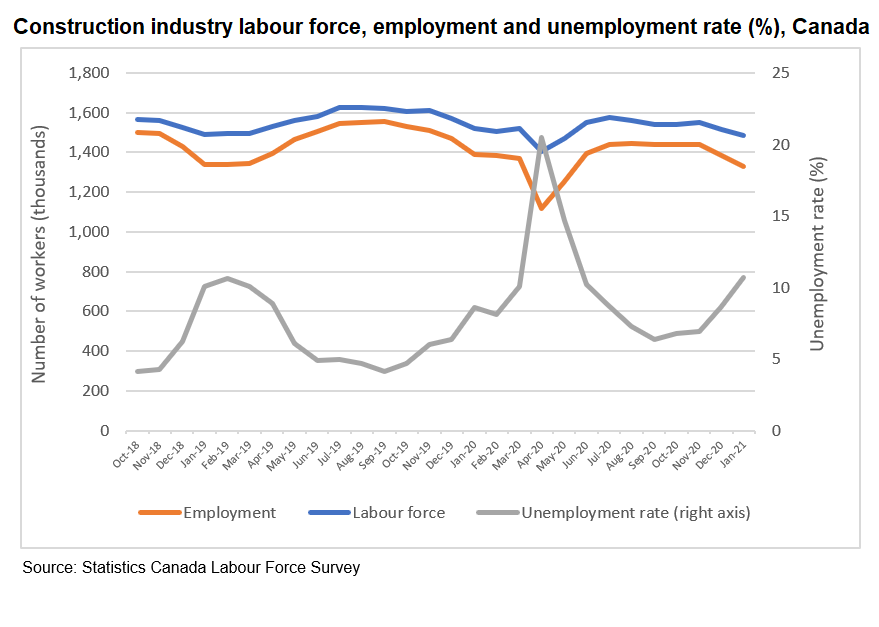 January’s employment decline is not unexpected. Construction’s seasonal nature usually means that work on infrastructure projects such as roads, highways, and bridges pauses during the coldest months of the year. As well, Ontario and Quebec went into lockdowns in late December, which further limited some construction activities.

And while these trends were expected in January’s labour force study, more troubling perhaps is that investment in building construction has been on a steady downward trend for the last five months of 2020.

On an unadjusted basis, overall investment peaked at $17.8 billion in August 2020 but has since declined over the past five months to $15.6 billion in December. Although it is unclear to what extent these investment reductions will affect construction employment, the downward investment trend suggests some weakness in the market leading into 2021.

The largest month-over-month percentage declines in construction employment were recorded in New Brunswick (-20.8%), followed by Newfoundland and Labrador (-9.3%) and Ontario (-6.9%). Most other provinces recorded losses of 5% or less. Alberta (+1.1%) was the only province to report a gain in employment.

As a consequence, the industry unemployment rate increased nationally to 10.7% in January – up from the 8.7% recorded in December.

Finally, total hours worked continued to decline into January (-8%). That figure, however, was only 1% below January 2020 levels.

Conversely, hours worked in Alberta (+12%) and Saskatchewan (+9%) were up significantly year-over-year in January, while Manitoba (+1%) and British Columbia (+1%) saw marginal gains.