Employment, labour force figures down year over year; may fall further in Q1

Across the economy, total employment for all industries nationally dropped by 63,000 workers (-0.3%) in December. This was the first month since April in which employment figures dropped. Employment declined in Nova Scotia, Saskatchewan, Manitoba, and Prince Edward Island, but matched its pre-COVID level in Newfoundland and Labrador. Alberta and Manitoba remained furthest away from that target.

Statistics Canada’s latest Labour Force Survey (LFS), conducted during the week of December 6 to 12, shows that month-over-month employment in the industry dropped by 4% – to 1,386,200 workers – in December. And while a degree of contraction is expected at this time of year, given the somewhat seasonal nature of construction employment, the drop of 55,900 workers suggests that the effects of the COVID-19 pandemic continue to be felt.

Compared with December 2019, industry employment is down by 86,300 workers (-6%) – a fact that reflects softening demand in some provinces. 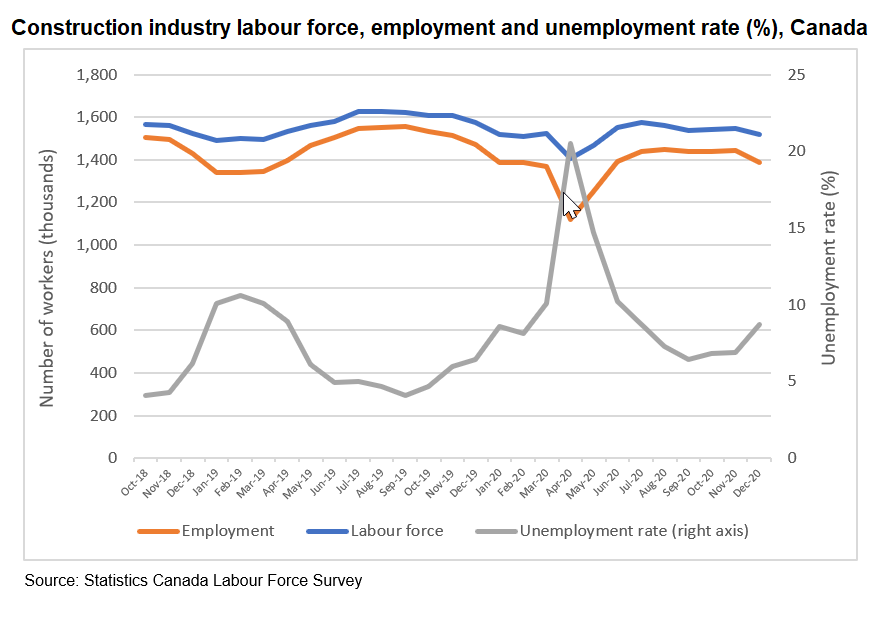 The effects of subsequent new measures to contain the spread of COVID-19 will be reflected in the LFS results for January and February, and are likely to produce a further softening of employment for the early part of 2021.

British Columbia was the only province to record a month-over-month increase in construction employment in December. The province added 8,600 workers, for an increase of 4%. Year over year, however, employment in B.C. remains down by some 28,000 workers (-12%).

Employment in Newfoundland and Labrador was hit hardest. Reductions continued with year-over-year declines of some 2,400 workers (-14%) and a drop of 3,900 workers (-21%) in December. Ontario, meanwhile, was least affected, shedding only 2% over the year, and 3% in December.

Labour force contracts in all but Nova Scotia

The decline in employment had a corresponding impact on construction’s labour force, which was down nationally to 1,518,100 workers in December – a decrease of 3.5% from December 2019. The monthly total was slightly better, with the labour force declining by just 2% from November’s total.

In most other provinces, labour force decreases were more muted. Most western provinces, excluding B.C., recorded declines of less than 5%. Newfoundland and Labrador, meanwhile, saw its labour force drop by 7.3% year over year. The cancellation or suspension of several projects of significance in the province, such as the West White Rose expansion project, contributed to that decline.

Nationally, total hours worked within the construction industry fell only marginally (-0.6%) in December but remained 7% below December 2019 levels. Newfoundland and Labrador continued to experience significant declines in hours worked, reporting a 21% decline from November’s levels and a 19% drop year over year. Conversely, British Columbia (+13%), Nova Scotia (+9%), Manitoba (+6%), and New Brunswick (+4%) all saw gains in hours worked in December.

The national construction unemployment rate rose to 8.7%, which was 2.3 percentage points higher than December 2019 levels and 1.8 percentage points higher compared with November. British Columbia was the only province to report a decline in unemployment, falling to 3.7%. While the decline in unemployment was positive, the overall size of the construction labour force remains down from 2019 levels, meaning labour market conditions have tightened in the province.