Construction’s stuttering start to the year continued in February.

After recording a decline in employment of more than 4% in January, the industry added just 800 jobs in February – an increase of less than 1%. National industry employment figures now stand at 1.329 million – 4% less than in February 2020. These figures are according to the latest data from Statistics Canada’s Labour Force Survey, which was collected during the week of February 14 to 20. 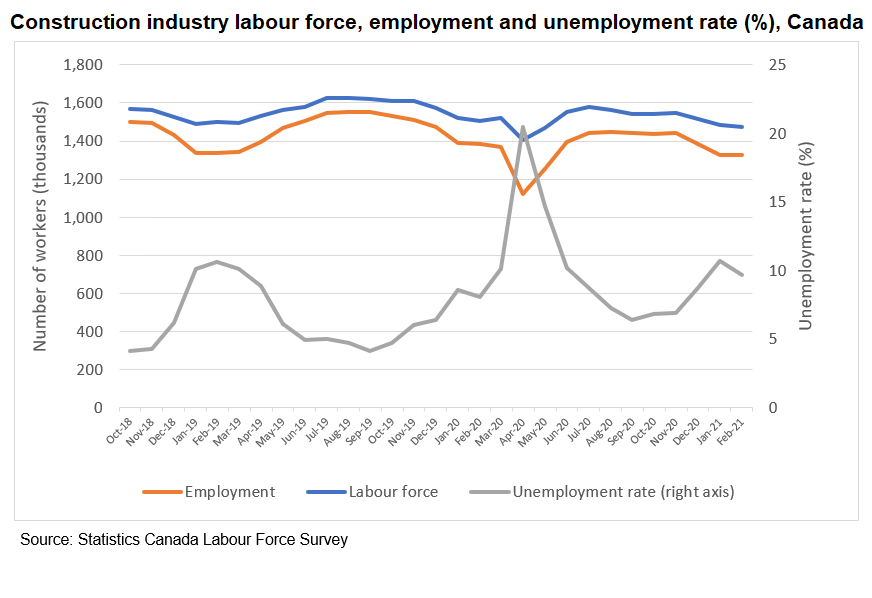 A number of factors may account for the industry’s slow start to the year. Seasonality is one. Road, bridge, and highway construction is typically reduced during the early months of any year. The industry is also still feeling the effects of the COVID-19 pandemic.

Public-health restrictions enacted by many provinces in late December were eased in early February. Quebec, Alberta, New Brunswick, and Nova Scotia all saw restrictions loosened to varying degrees on February 8. In Ontario, previous requirements were lifted for many regions on February 10 and 15 – although several of the province’s largest regions remained under stay-at-home orders through the reference week. Various measures were also eased in Manitoba on February 12.

In contrast, Newfoundland and Labrador re-introduced a lockdown on February 12, requiring the widespread closure of non-essential businesses and services.

Not surprisingly, the largest month-over-month percentage employment declines in construction were recorded in Newfoundland and Labrador (-17.6%). Nova Scotia (-7.8%), Prince Edward Island (-1.8%), and British Columbia (-1.3%) followed. New Brunswick, Ontario, and Alberta also experienced declines in employment, but of less than 1%.

The industry’s unemployment rate decreased nationally to 9.7% in February, down from the 10.7% recorded in January. It remains 1.6 percentage points above February 2020 levels, however.

Year over year, Newfoundland and Labrador saw the largest labour-force decrease. The province shed 5,600 workers (-23.8%) compared with a year ago. Alberta and Quebec, however, saw year-over-year increases of 6.4% and 3.8% respectively.

The downward trend in many of these metrics may be short lived. Two key metrics from Statistics Canada reached record totals in January 2021. The value of building permits issued by municipalities across the country topped out at just shy of $10 billion – with much of that activity centred in the residential sector – while building construction investment reached an all-time high of $16 billion, again thanks to strong demand for residential properties.

Growth in the non-residential sector, however, remained much lower. Though as the economy reopens and the recovery takes hold in the spring, demand for non-residential construction is expected to accelerate.