Statistics Canada collected the data during the week of September 12 to 18, and at that time, provinces were managing several key issues relating to COVID-19. Proof-of-vaccination requirements were made mandatory in several provinces, while some regions of the country had also re-introduced indoor masking requirements. In Alberta in particular, employers were urged to pause employee return-to-work plans.

Meanwhile, the September reference week saw the new school year begin across the country, a fact that affected labour market conditions for students as well as parents.

Construction’s seasonally unadjusted numbers for September tell a more nuanced story. The industry shed 24,300 workers during the month. This represented a drop of 1.6% and was the first decline in industry employment since January. It was also likely the product of the cyclical nature of the industry.

The larger industry employment picture shows strength. Month to month, employment in 2021 has been either at or above historic levels. Employment in September, for example, was 3.8% (+54,300 workers) ahead of employment in the same period last year. 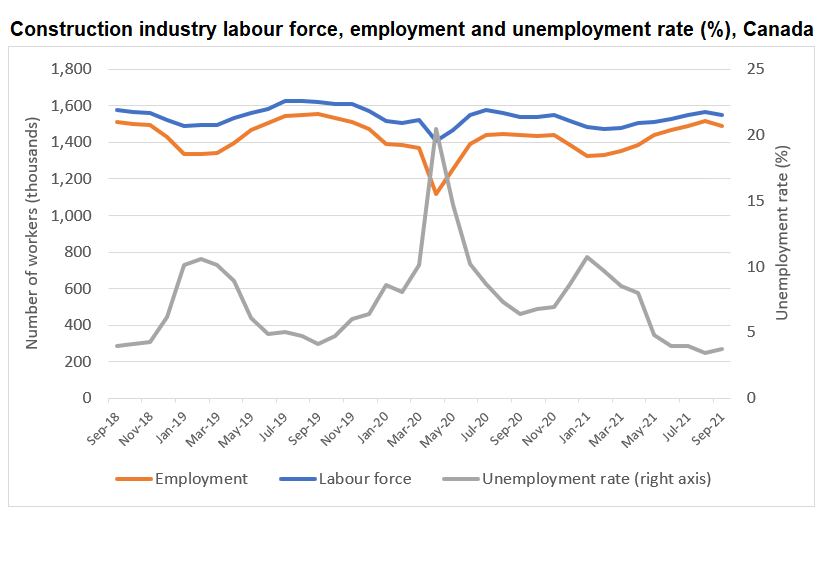 Newfoundland and Labrador and Prince Edward Island were the only provinces to report month-over-month gains in employment in September, increasing 1.6% and 3.4% respectively. Employment was relatively unchanged in Ontario, Manitoba, and Quebec, with each province seeing fluctuations in employment of less than 1% from the previous month. The remaining provinces saw declines in employment compared to August, with Nova Scotia and Saskatchewan reporting drops of 4.7% and 4.6% respectively.

Most provinces also reported gains in industry employment over September 2020. At 7% and 6.1% respectively, Quebec and Ontario reported the greatest gains, with many other provinces reporting gains of 5% or lower. Year-over-year employment was lower in Prince Edward Island (-17.6%), New Brunswick (-2.9%), Alberta (-2.0%), and Nova Scotia (-0.8%).

Demand for workers is rising, particularly as the total investment in building construction continues to increase. Amid such demand factors, the unemployed-to-job vacancy ratio for construction fell to 1:3 in the second quarter of 2021, and according to the Canadian Survey on Business Conditions, recruiting skilled employees was expected to be an obstacle for more than one-third (35.2%) of construction businesses, compared with 27.8% of all businesses.