The latest Labour Force Survey (LFS) issued by Statistics Canada on November 5 shows a gain in employment of 31,000 jobs, or 0.2% compared to the month previous. The national unemployment rate also continued to trend downward, with a drop of 0.2 percentage points for the month. October’s unemployment rate of 6.7% is the lowest seen in 20 months and is within one percentage point of the 5.7% rate seen in February 2020. Additionally, the adjusted unemployment rate – which includes people who wanted a job, but did not look for one – reached 8.7%, the lowest rate since the onset of the pandemic. 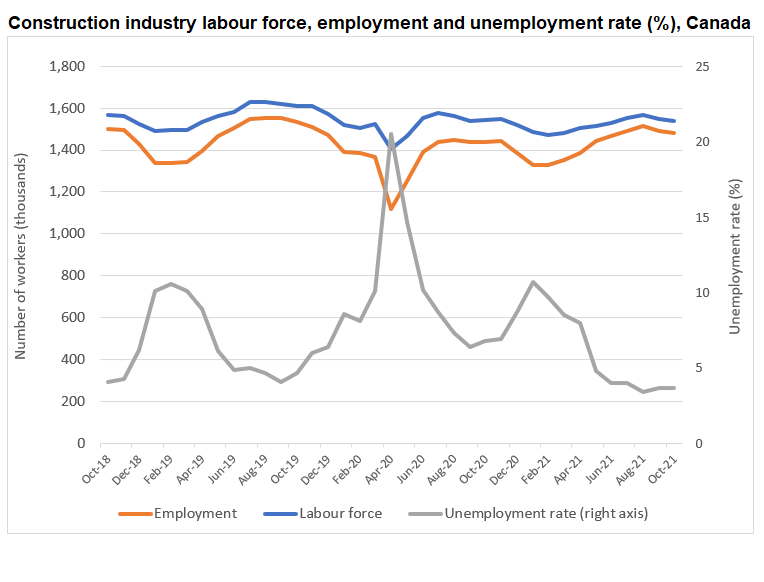 Statistics Canada collected data for its most recent LFS during the week of October 10 to 16 – a time when various provinces and workplaces had proof-of-vaccination initiatives in place, and when British Columbia, Ontario and Quebec had lifted capacity limits for many indoor gatherings where proof of vaccination was mandatory.

The seasonally unadjusted employment numbers for construction show a different trend to the overall national picture.

October marked the second month in a row in which employment declined slightly. Following on the heels of the 1.6% drop in employment in September, the industry shed a further 8,700 workers (-0.6%) in October. Both reductions are likely due to the cyclical nature of the industry, with work wrapping up on projects that may be affected by the colder weather.

Three of the four Atlantic provinces reported notable month-over-month gains in employment in October. New Brunswick led the way at 6%, with Prince Edward Island (4.9%) and Newfoundland and Labrador (4.7%) following. Only Nova Scotia (-1.4%) reported a loss for the month.

Compared to a year ago, October employment levels dropped in four provinces: Prince Edward Island (-4.5%), Alberta (-3.0%), Nova Scotia (-1.7%), and Manitoba (-1.2%). The remaining provinces all reported increases in employment, with Saskatchewan (8.2%) and Quebec (7.8%) reporting the most notable gains.

Most provinces reported increases in their unemployment rates in October. At 2.8%, Nova Scotia’s was the largest increase. Alberta and Newfoundland and Labrador also reported notable increases – 2.2% and 2.0% respectively.

After six months of continuous growth, the construction industry lost workers for the second consecutive month in October (-9,700). The number of workers in the national construction labour force is 1,539,500. This figure is consistent with the October 2020 labour force, but 4.5% (-71,700 workers) lower than October 2019 levels. Saskatchewan, Quebec, Ontario, Nova Scotia, and British Columbia all reported year-over-year gains in their construction labour forces, while Alberta (-8.3%) recorded the most notable annual decline.

Finally, hours worked across the country dropped by more than 9% in October. Despite that fact, the industry continues to operate at a much greater capacity than this time last year.

The remaining provinces reported year-over-year gains, with Quebec experiencing the most notable increase of 15.2% from October 2020 levels.