Labour force records gains in August, but challenges could be ahead

When Statistics Canada conducted its latest Labour Force Survey during the week of August 15 to 21, most provinces were in the final or near-final stages of their public-health reopening plans. Indoor locations, such as restaurants, recreation facilities, personal care services, retail stores, and entertainment venues, were generally permitted to be open, with varying degrees of capacity restrictions, and for the first time since March 2020, fully vaccinated non-essential travellers from the United States were permitted to enter Canada without quarantine requirements.

As a result, all-industry seasonally adjusted employment rose for the third consecutive month, increasing by 90,000 (+0.5%) in August. Combined with gains in June and July, the August increase brought employment within 156,000 (-0.8%) of its February 2020 level; the closest since the onset of the pandemic. The unemployment rate fell for the third consecutive month in August, down 0.4 percentage points to 7.1%; the lowest rate since the onset of the pandemic. 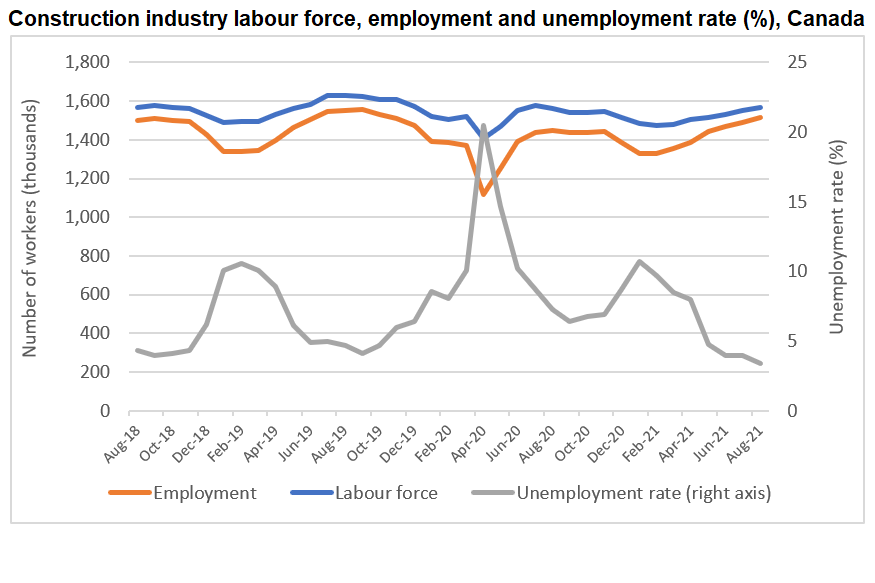 The positive news in the numbers is that the industry continues to add workers, while also reducing its unemployment rate. An additional 17,000 workers joined the labour force in August, bringing the number of workers in the sector’s labour force to 1,569,000. That figure is slightly above (0.2%) August 2020 levels and is the first year-over-year increase since May.

Labour force gains compared to August 2020 show Newfoundland and Labrador, Nova Scotia, Quebec, Ontario, and Manitoba all recording increases. The remaining provinces saw declines in their labour forces, with the most notable being Prince Edward Island.

Most provinces saw their industry unemployment rates decline in August, with New Brunswick (-2.9%) and Alberta (-2.1%) reporting the largest provincial declines. The unemployment rate rose in British Columbia and Newfoundland and Labrador, increasing by 1.9 and 1.6 percentage points respectively, while Quebec saw a slightly smaller increase of 0.9 percentage points from July rates. The remaining provinces saw declines of less than 2%.

While August’s employment numbers point to continued recovery and growth across the industry, there could be signs that the industry is cresting from the peak levels achieved this year.

Statistics Canada reported in early September that the value of building permits issued across the country in July 2021 dropped 3.9 percent to below $10 billion. All provinces except British Columbia and Newfoundland and Labrador reported losses, while both the residential (-3.1%) and non-residential (-5.6%) sectors also contracted.

Meanwhile, the value of construction investment also dropped (-1.7%) in July. A slight gain in the non-residential sector was more than offset by the third consecutive month of declining activity in the residential sector.

Both indicators could be signs that industry activity may have reached a peak, and with the fourth wave of COVID-19 looming, further slowdowns could be possible.