Construction employment rises again in July, but remains below 2019 levels 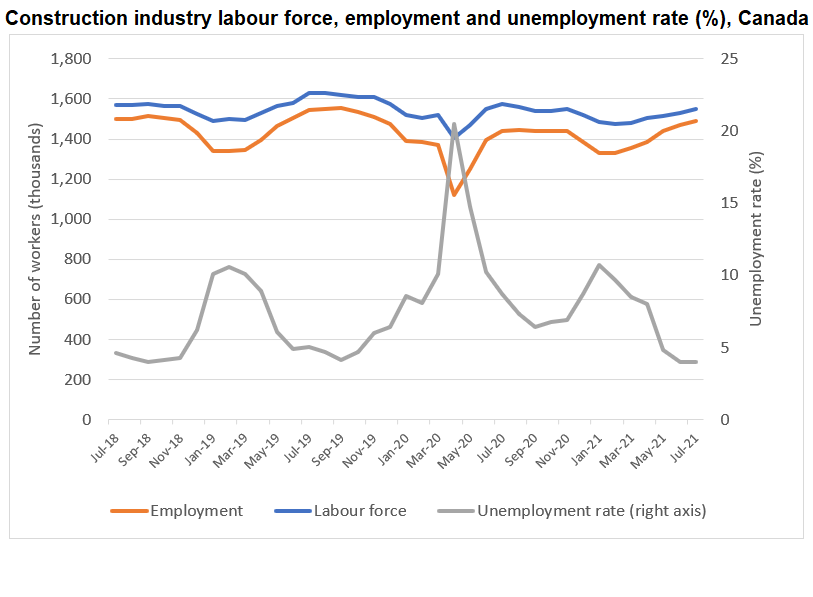 Statistics Canada released its July LFS data on August 6. The survey was conducted during the week of July 11 to 17 at a time when provinces had eased, or were in the process of easing, public health restrictions due to the COVID-19 pandemic. As a result, all industry seasonally adjusted employment rose by 94,000 (+0.5%) in July. The change brought employment to 246,000 (-1.3%) workers below February 2020 levels. Growth was concentrated almost entirely in Ontario, while Manitoba, Nova Scotia, and Prince Edward Island also reported employment gains. All of the gains occurred in the private sector.

Across the provinces, construction employment growth was modest – a fact likely due to the industry’s role as an essential service during the pandemic. Saskatchewan reported the largest monthly gain at 6%, followed closely by Nova Scotia at 5.5%. Employment gains were seen across most other provinces, apart from Prince Edward Island (-1.6%), and in Ontario (-0.2%) and Quebec (+0.2%) where employment was virtually unchanged.

Nova Scotia and Quebec are the only provinces reporting employment above pre-COVID levels.

Meanwhile, construction’s monthly unemployment rate was unchanged in July, remaining at 4%. The rate remains 4.7 percentage points below July 2020 levels and, tellingly, one point below 2019 levels.

Construction’s unemployment rate dropped or remained virtually unchanged in most provinces in July. Newfoundland and Labrador and Manitoba saw the most notable declines, falling 2.1 percentage points from June. British Columbia and Nova Scotia also reported declines of 1.9% and 1.2% respectively.

The number of hours worked also continues to rise as workers continue returning to the industry. The industry is currently operating at a much greater capacity than this time last year when stringent restrictions were imposed on certain segments of construction. As a result, national total hours worked were notably higher in July 2021 – up 8.2% from July 2020 levels, but below (-5.4%) pre-COVID levels of July 2019.