Key indicators suggest construction on the path to recovery

Construction continued its slow climb back to pre-pandemic levels in June.

Employment, for example, recorded gains in most provinces month over month in June, and is higher in most parts of the country than it was a year ago. Newfoundland and Labrador recorded the highest year-over-year growth in employment at 18.3%, with Nova Scotia and Quebec also seeing annual increases of greater than 10%. Conversely, employment is lower year over year in Prince Edward Island (-22.8%), New Brunswick (-6.9%), and British Columbia (-4.2%).

Only two provinces – Quebec and Nova Scotia – have seen their respective workforces increase compared with June 2019, though Ontario is not far off pre-pandemic levels. 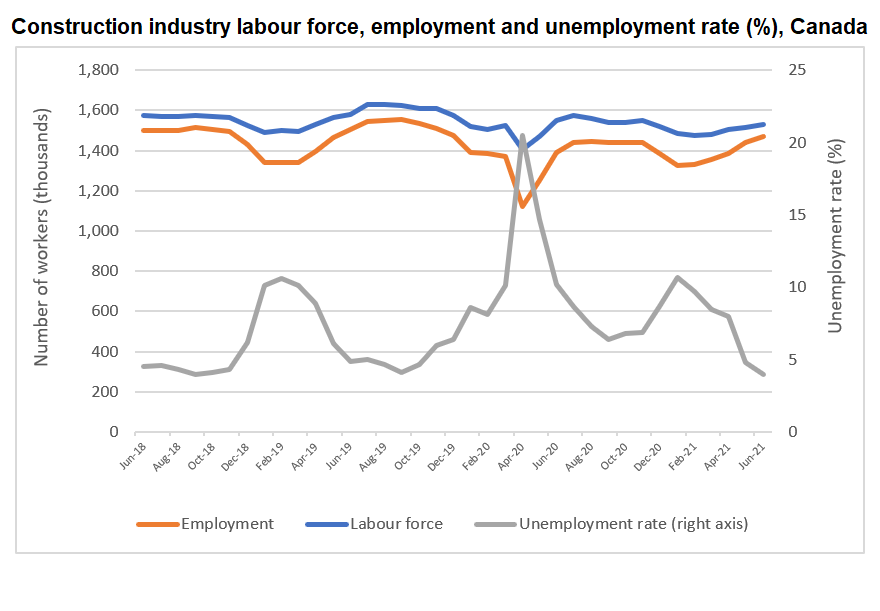 Hours worked are up over June 2020

As restrictions on public gatherings subside, construction is operating fully – and at a much higher capacity than it was at this time last year. National hours worked in June 2021 were 12.5% higher than in June 2020, but remain more than 6% below levels seen in June 2019.

British Columbia was the only province to report a decline in hours worked from May levels.

In a further sign of a recovering economy, the latest release of Statistics Canada’s “Investment in building construction” shows investment levels for households, businesses, and governments continued to rise in May. Since January 2021, levels increased month over month from $15.9 billion to $18.5 billion in May 2021.