Construction adds workers in May; the fourth consecutive monthly increase

Construction continues to push through the third wave of the COVID-19 pandemic.

Although public-safety measures remained in place across many provinces, May’s unadjusted labour force data for the construction sector shows a fourth consecutive month in which employment has risen. 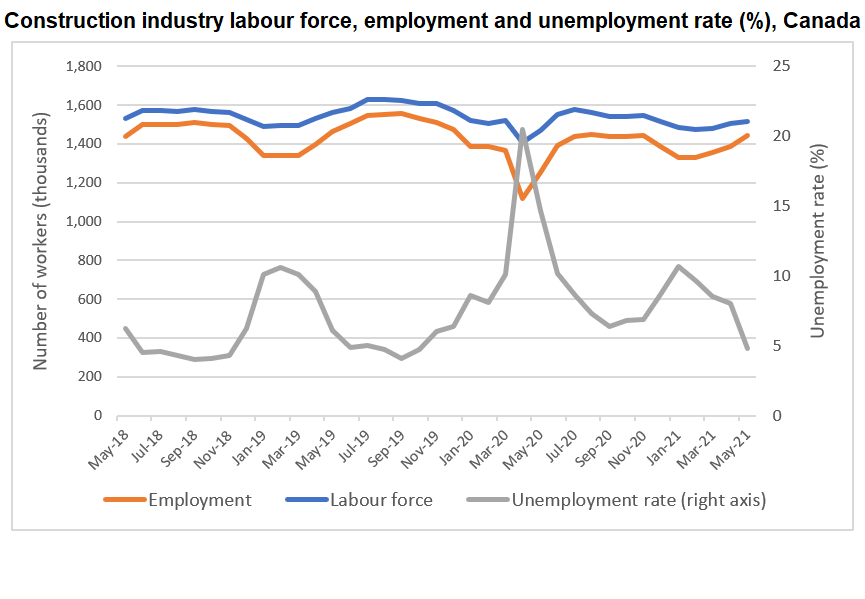 Statistics Canada collected data for its most recent Labour Force Survey during the week of May 9 to 15. At the time, several provinces had tightened public-health measures to reduce the spread of the COVID-19 virus and its variants. Ontario, Alberta, Manitoba, and Nova Scotia were among those to limit public activities. In contrast, New Brunswick and Quebec eased some of their respective restrictions, moving those economies more firmly into recovery.

Key metrics show that construction is operating at a much higher capacity this spring than it was a year ago.

National total hours worked, meanwhile, were 36.8% higher in May 2021 than they were in May 2020, but remain slightly (-2%) below pre-COVID levels in May 2019. All provinces but two – Prince Edward Island and New Brunswick – recorded significant year-over-year gains in hours worked. At 65.8%, Newfoundland and Labrador recorded the largest increase over the year.

Additionally, most provinces saw industry employment increase in May. Newfoundland and Labrador, for example, saw the largest percentage increase at 31.9%, while New Brunswick reported a gain of 18.4%. All other provinces reported employment increases, except for Prince Edward Island and Saskatchewan, where employment remained unchanged. These two provinces were the only ones to see an employment decline compared with May 2020, falling 17.7% and 3.9% respectively.