For the time being at least, construction has stood strong in the face of the third wave of COVID-19 outbreaks.

Data from Statistics Canada’s Labour Force Survey (LFS) for April shows that sectoral employment rose for the third consecutive month. The industry added 30,700 workers (+2%) for the month, although employment remains about 21,000 workers below pre-pandemic levels recorded in April 2019.

Statistics Canada collected data for its April LFS report during the week of April 11 to 17, and at a time when several provincial governments had tightened public-health measures to control the third wave of the COVID-19 pandemic.

Ontario implemented a province-wide stay-at-home order on April 8 that set restrictions for many non-essential businesses and closed those construction sites considered to be non-essential. British Columbia was under its own “circuit-breaker” restrictions as of March 30, while stricter public-health measures were also re-instated in many parts of Quebec.

According to Statistics Canada, national seasonally adjusted overall employment levels fell by 207,000 (-1.1%) workers, with the national unemployment rate rising to above 8%, and the labour underutilization rate, which captures the full range of people who are available and want to work, increasing to 17%. 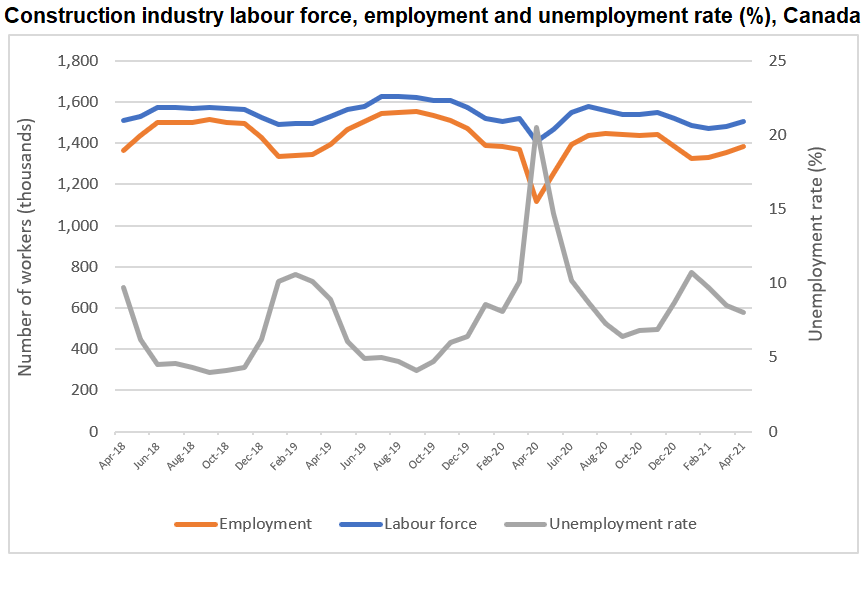 Year over year, construction employment was up 24% nationally, and up significantly in a number of provinces, including Quebec (77%), Nova Scotia (28%), and Saskatchewan (25%). Newfoundland and Labrador was the only province to see an employment decline, falling 3.3% from April 2020 levels.

Construction operating a higher capacity than a year ago

Construction worked at a much higher rate last month than it did in April 2020, when public-health measures were at their most stringent and restrictions were imposed on certain segments of the industry.