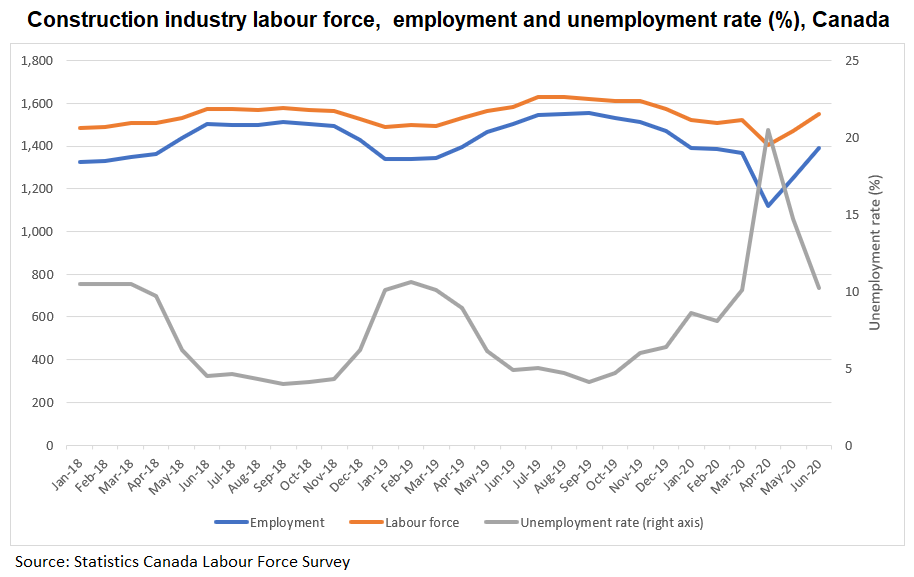 However, industry labour recovery has been unevenly distributed across the provinces. Despite experiencing the largest decline in unemployment rates, Newfoundland and Labrador recorded a rate of 26%, down from the 40% registered in May. Ontario and Quebec followed, with the unemployment rate falling 6% in both provinces to 8.5% in Ontario and 7.3% in Quebec, down significantly from the 40% unemployment rate recorded in Quebec in April. All provinces recorded reductions in the construction unemployment rate, with the exception of Nova Scotia, which increased from 12.6% in May to 14% in June. Unemployment in the remaining provinces ranged from 6.3% in Manitoba to 17.4% in Alberta.
June also saw a significant bounce in total construction employment, with 140,700 workers added to payrolls – an increase of 11% over May. That brings national construction employment to totals surpassing pre-COVID figures in February. However, employment numbers still remain 111,100 (-7.4%) lower than they were in June 2019. The available labour force also gained 83,100 workers in June – a 5.7% rise since May – reflecting the re-entry of job seekers into the market as provinces gradually move into more advanced phases of economic reopening.
Recovery of construction employment also continued at varied rates, with Newfoundland and Labrador leading the recovery pack with an increase of 25.4% (2,900 workers) over May. Still, employment levels of 14,300 in June remain well below the 20,300 employed a year ago.
Construction employment in most provinces topped pre-COVID levels in June, with Prince Edward Island and New Brunswick significantly surpassing them. Only British Columbia, Ontario and Newfoundland and Labrador remain below pre-pandemic employment levels.
Total hours worked in the construction sector also continued to rebound from the lows experienced in April. Despite this increase, total hours worked remain significantly below pre-COVID levels for British Columbia (-18%) and Ontario (-5%). Prince Edward Island (+35%) and New Brunswick (+31%) saw the greatest increases in hours worked compared to pre-COVID levels.
To some extent, large swings in unemployment rates, the number of workers employed, and hours worked are a function of both economic conditions in each province prior to COVID-19 and varied levels of recovery as provincial economies re-open and job seekers return to markets. As the economy continues to recover, month-to-month changes will become less dramatic.
‹ Previous  |  Next ›