May Labour Force Survey (LFS) data from Statistics Canada provides some encouraging news, with employment numbers in both the general economy and the construction sector bouncing back as provinces begin to ease COVID-19 restrictions. But unemployment rates in some provinces remain stubbornly high as job seekers re-enter the market.

The May LFS reflects labour market conditions from May 10 to May 16, as British Columbia, Saskatchewan, Manitoba, Quebec, Prince Edward Island, New Brunswick, and Newfoundland and Labrador began to ease most significantly on pandemic restrictions. 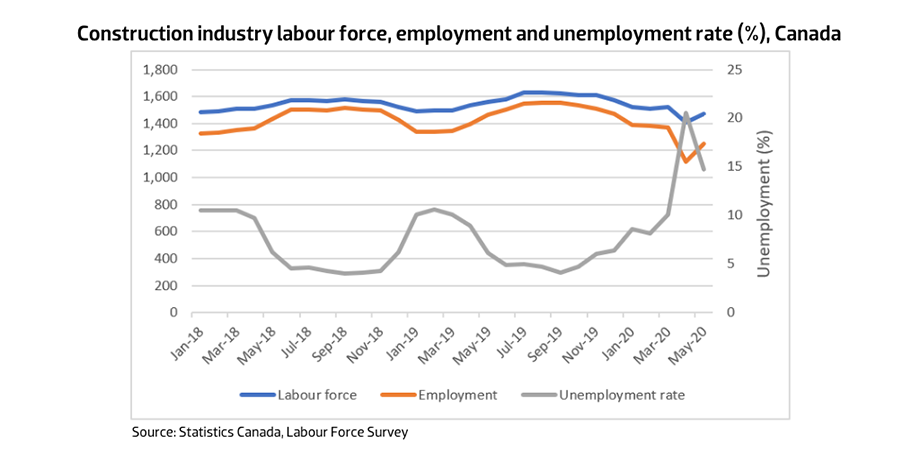 The construction labour force gained 61,200 workers in May, up 4.6% since April, again largely reflecting re-entry of job seekers into the construction labour force.
Some provinces also report a concurrent recovery in employment over April, led by Quebec (+51.4%), PEI (+34.7%), and New Brunswick (+34.1%). Employment growth in the remaining provinces remained below 20%, with Newfoundland and Labrador, British Columbia, and Alberta seeing lowest growth. Ontario’s 6% recovery in employment was offset by a similar rise in workers returning to the labour force. Following a 20% decline in April, Newfoundland and Labrador saw no change in employment in May.
However, provincial employment remained below February 2020 levels, with the exception of Nova Scotia, New Brunswick, and PEI.
Unemployment rates for construction ranged from 40.3% in Newfoundland and Labrador to 11.2% in British Columbia, with no other provincial rate topping 18%.
With total construction hours worked rebounding in many provinces, these numbers remain decidedly below pre-COVID levels, most significantly in Newfoundland and Labrador (-34%), Ontario (-25%), and British Columbia (-24%). Only PEI reported more hours worked.
Construction sub-sectors also fared differently. Comparing March-to-May average employment in 2019 to 2020, heavy and civil engineering is down 19%, while specialty trade contractors are down 15%. Building construction employment declined only 2%.  Residential building construction weakened, with the geatest impacts felt in urban centres.
The June LFS report should provide additional clarity regarding the further impact of easing COVID-19 restrictions.
‹ Previous  |  Next ›