Statistics Canada’s April Labour Force Survey (LFS) landed May 8th with sobering news for the Canadian economy in general, and the construction industry in particular, as the COVID-19 shutdown continued to tear through employment numbers.

According to the April LFS, the economy has shed more than three million workers as a result of the COVID-19 pandemic – two million in April alone. The number of people employed but working less than half their usual hours increased by 2.5 million from February to April. The number of Canadians either not employed or working substantially reduced hours was 5.5 million – more than one-quarter of February’s employment level. A 15.7% decline in employment since February is unprecedented among Canadian labour market downturns and will have significant repercussions in squelching consumer demand.

For the construction industry, the April 2020 unemployment rate reached 20.5% – more than double the 10.1% level reached in March. The industry lost 249,300 jobs in April, bringing the total employment decline since February to 266,100 – a total 24% decline. Canada’s two largest construction workforces were hardest hit since February, with 94,000 jobs lost in Quebec and 91,200 in Ontario. Most of those jobs were lost between March and April: 93,100 in Quebec and 81,800 in Ontario. Alberta, representing the country’s fourth largest construction labour force, experienced a decline of 31,000 workers during that period. 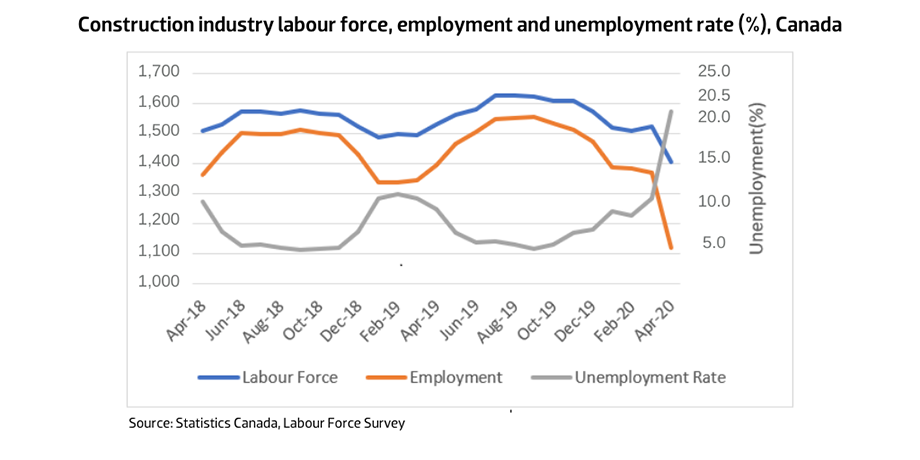 As expected, the unemployment rate rose highest in Quebec, reaching 40.3 % in April, followed closely by Newfoundland and Labrador (38.9%), New Brunswick (31.6%), and PEI (24.6%). Nova Scotia, Alberta, Saskatchewan, and Manitoba clocked in at about 19%, while Ontario and BC registered rates at 14% and 11.7% respectively. The month-over-month rise in unemployment was highest in Quebec, followed by PEI and Alberta. Saskatchewan and Newfoundland and Labrador registered the lowest rise in construction unemployment, although they were already experiencing above-average unemployment heading into the pandemic. BC also registered a very low rise in unemployment, which is not surprising since the province’s industry, for the most part, remained open throughout the month of April.
The last time the national construction unemployment rate topped 20% was back in April 1995, when it spiked to 20.9%. While that figure is shocking, it was lower than the rate recorded in April 1991: 24.9%.
BuildForce will be paying close attention to the June LFS numbers, which will provide us with a better sense of a rebound in employment as economies gradually open up. Those numbers will help guide our assumptions for a recovery.
‹ Previous  |  Next ›