Encouraging news from the Statistics Canada Labour Force Survey (LFS) continues for July, with both general and construction employment rebounding nationally through the week of July 12 to July 18 – although the rate of improvement continues at a more moderate pace.

Construction industry employment also continued to rebound in July by 3.4% over the previous month, but at a slower pace than both May and June. National construction employment remains 7% below 2019 levels, with the greatest year-over-year provincial employment declines seen in Newfoundland and Labrador (-29%), Saskatchewan (-13%), and British Columbia (-12%).

The construction labour force also continued to grow by 1.6% in July over the previous month, although more slowly than in May and June. The labour force remains 3%, or 50,900 workers, below July 2019 levels. 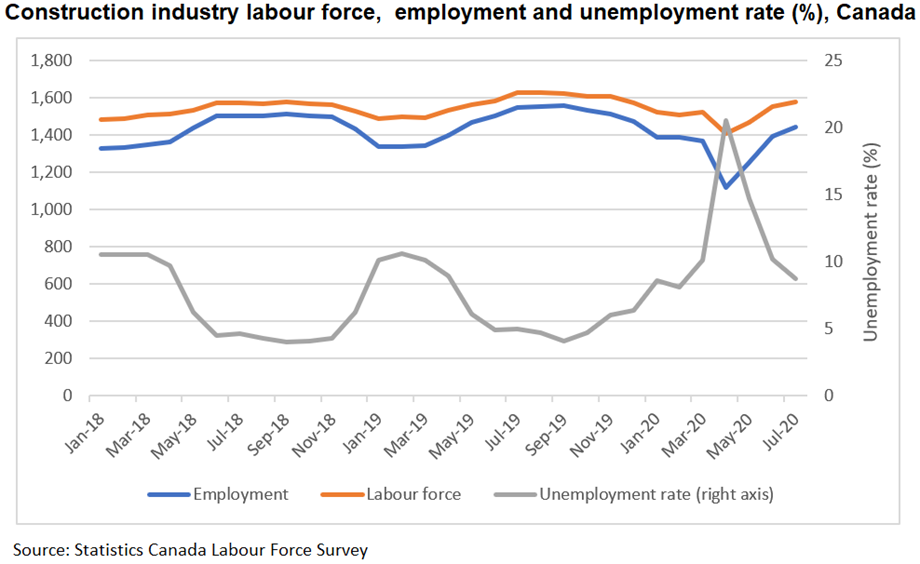 With construction industry recovery distributed unevenly across the provinces, month-over-month changes require careful analysis. For example, as employment continued to rise across Canada in July, both Prince Edward Island (-1.3%) and New Brunswick (-0.7%) experienced marginal declines from June. However, employment in Prince Edward Island is up nearly 6% from July 2019 levels. Newfoundland and Labrador experienced the most notable rise in employment (+9%), as the province continues to make up ground on 2019–2020 employment setbacks and a lack of employment growth in May.
In British Columbia, employment remains 8% below pre-COVID February levels, likely relating to challenges associated with moving workers back to several northern projects that rely on camps to house work crews. Ontario and Newfoundland and Labrador, which had not yet surpassed pre-COVID employment levels in June, surpassed that February benchmark in July.
In Newfoundland and Labrador, a rise of 1.2 percentage points in the unemployment rate, from 26.4% to 27.6% in July, reflects a continued re-entry of workers in search of employment into the labour force. Unemployment rates in Alberta and Nova Scotia recorded declines of 5.5% and 4.2%, respectively, from June.
National hours worked also rebounded in line with employment, 4% higher in July compared to pre-COVID levels in February – but 12% below July 2019 levels. The number of hours worked in British Columbia remains 15% below pre-COVID levels. The most significant decline persists in Newfoundland and Labrador, where hours worked remain 39% below July 2019 levels. Conversely, hours worked in Prince Edward Island are up 10% compared to this time last year.
Slower improvements in construction labour data reflect the pace of resumption of economic activities beginning largely in May and continuing into June. Should the industry’s recovery trend continue, labour markets will require more careful analysis, as smaller swings in employment, labour force size, and hours worked will take on greater significance.
‹ Previous  |  Next ›