The national construction unemployment rate continued its fourth consecutive month of decline through August, even as a slight dip in labour force numbers warrants further observation.

The Statistics Canada Labour Force Survey for August, which reflects labour market conditions for the week August 9–15, saw national construction unemployment fall to 7.3% from a high of 20.5% in April. The 1.4% decline is the smallest since April, but not surprising, considering the significant recovery the construction industry has experienced following COVID-19 lockdowns. However, the August number remains 2.6 percentage points higher than that recorded in August 2019. 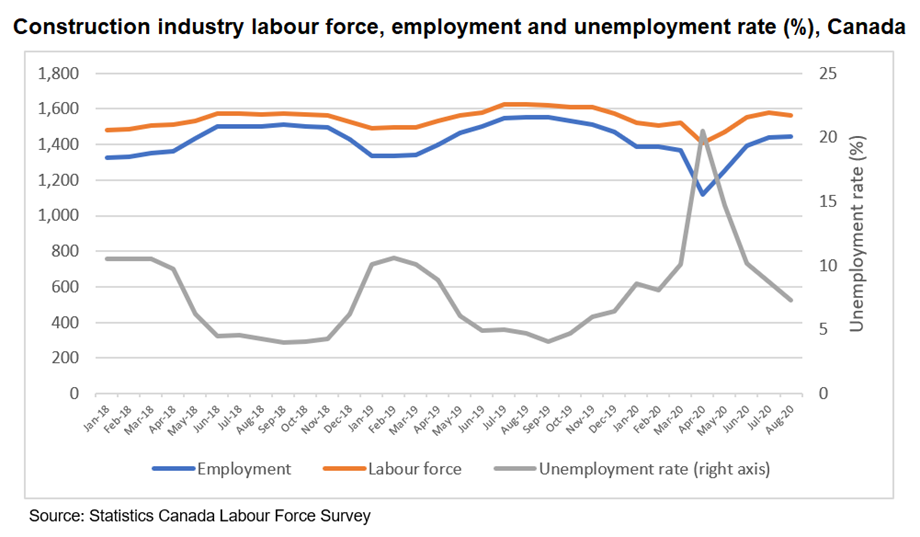 Regionally, the unemployment rate in Newfoundland and Labrador fell 6.1 percentage points in August, following a slight increase in July. Despite these gains, the province’s unemployment rate remains approximately 9 percentage points higher than August of last year. In contrast, the unemployment rate in Ontario remained relatively stable at 8%.
National employment rolls grew slightly by 0.5% from July to August, though the total remains 6.7% lower than levels seen in August 2019.
Shifts in employment numbers were unevenly distributed across Canada in August, with Saskatchewan (+5.7%), Nova Scotia (+5.4%), and New Brunswick (+4.8%) registering notable gains, while British Columbia experienced only marginal growth of 0.1%, with  employment still 8% below February levels. Ontario employment fell slightly by 2.4% to just below pre-COVID levels, whereas Newfoundland and Labrador continued to lag in its recovery, with employment levels remaining 31.7% below those recorded in 2019.
Employment in the remaining Canadian provinces remains well above pre-COVID levels, with Prince Edward Island and New Brunswick continuing to surpass 2019 levels in August.
In addition to the promising recovery in employment, working hours also recovered in August. The number rebounded nationally to a level 7% higher than February pre-COVID levels – although it remains 10% below August 2019 levels. However, the number of hours worked in British Columbia remains 12% below pre-COVID levels and 11% below August 2019 levels. Despite a marginal decline in Ontario construction employment, hours worked were up slightly from July levels.
While overall improvements in employment remained the central story in August, a slight decline of 1% in the national labour force bears watching. That number could potentially be attributed to individuals pursuing opportunities in industries outside construction or even voluntarily withdrawing from the labour force. Any such decline should alert the industry to the importance of maintaining recruitment efforts and supporting apprenticeship programs to ensure that employers can meet project needs through the recovery.
‹ Previous  |  Next ›