Statistics Canada conducted its latest Labour Force Survey (LFS) during the week of November 7 to 13, when public-health measures relating to COVID-19 were largely unchanged from the month previous. The survey showed all-industry seasonally adjusted employment increased by 0.8%. As well, the national all-industry unemployment rate fell for the sixth consecutive month. The drop of 0.6 percentage points brought the unemployment rate to 6% in November and was the largest monthly decline since March 2021.

Although positive, such changes could signal an emerging challenge.

Job vacancy data for September and LFS results for November suggest that labour markets increasingly resemble those observed since the summer of 2019. At that time, Canada's unemployment rate reached a record low, average wages increased after a prolonged period of little growth, and job vacancies ticked upward.

Statistics Canada warns that conditions such as these could contribute to new or worsening imbalances in provincial, regional, and local labour markets, including shortages of specific skills, or geographic mismatches between vacant positions and available workers with the skills to fill them.

Seasonally unadjusted numbers showed a further slowdown in activity. Employment fell for the third consecutive month – by 21,100 workers (-1.4%). Slowdowns such as these are common at this time of year, as some of the seasonal elements of construction begin winding down operations. 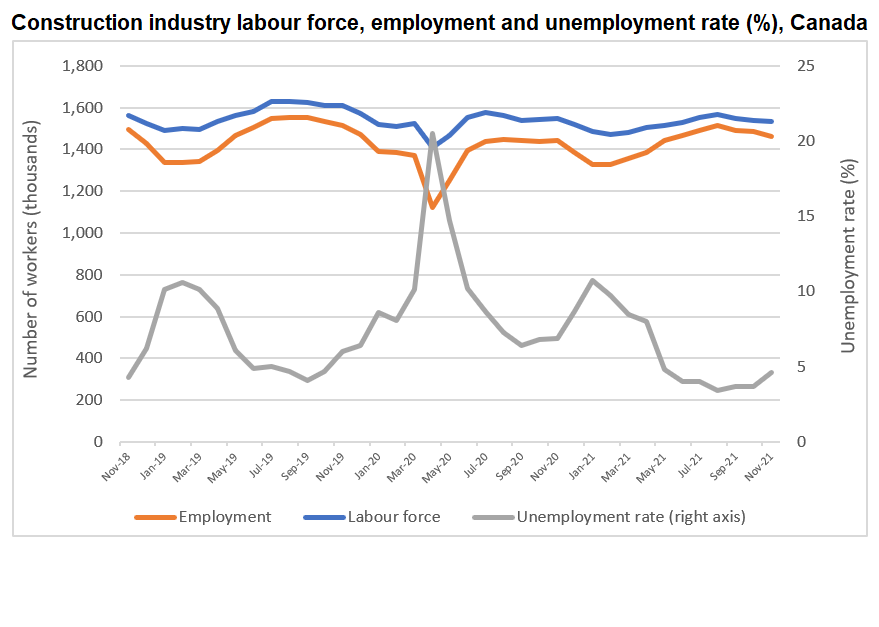 Every province bar Nova Scotia (+5.3%), Ontario (+1.3%), and Alberta (+0.8%) saw employment declines in November. Newfoundland and Labrador experienced the steepest drop at -8.9%, followed by Manitoba (-7.9%) and Saskatchewan (-5.8%). The remaining provinces each reported monthly declines of less than 5%.

Compared to 2020, November employment levels are lower in Prince Edward Island (-7.5%), Newfoundland and Labrador (-3.7%), British Columbia (-2.2%), and Alberta (-1.2%). Among the remaining provinces, New Brunswick (+14.8%) reported the largest increase in annual employment; the other provinces all reported gains of 6.1% or less.

Finally, hours worked dropped in every province except Ontario (+10.9%) and Nova Scotia (unchanged). Saskatchewan (-9.8%) recorded the most significant drop in hours worked for the month, consistent with its notable decline in employment and increase in unemployment.

Despite this decline, the industry continues to operate at a much greater capacity than this time last year. National total hours worked remain 3.6% higher than in November 2020. While hours worked have yet to return to pre-COVID levels, they are within 1% of the hours reported in November 2019.