Construction labour force contracts in December, but key metrics end 2021 on a high

The latest Labour Force Survey (LFS) data issued by Statistics Canada on January 7 shows a drop in industry employment of 22,900 workers (-1.6%) for the month. December marks the fourth month in a row in which construction has shed jobs; a trend mostly attributable to the limited seasonality that still exists in some segments of the industry.

Statistics Canada collected data for its December LFS during the week of December 5 to 11. The seasonally adjusted employment data for all industries recorded at the time showed a jump in employment of 55,000 (+0.3%). The overall national unemployment rate was little changed at 5.9% in December. That figure was slightly above its pre-pandemic February 2020 level (5.7%), and within 0.5 percentage points of the record low of 5.4% observed in May 2019.

Public health measures in place across the country during the reference week were largely similar to those in place in November and were among the least restrictive seen during the pandemic.

Critically, the widespread emergence of the Omicron COVID-19 variant, and any resulting adjustments to public health measures, occurred after the December reference week.

Newfoundland and Labrador experienced the steepest decline at just under 11%, with Nova Scotia (-9.5%) and New Brunswick (-5.1%) also seeing sharp drops. The remaining provinces all reported month-to-month declines of less than 3%. 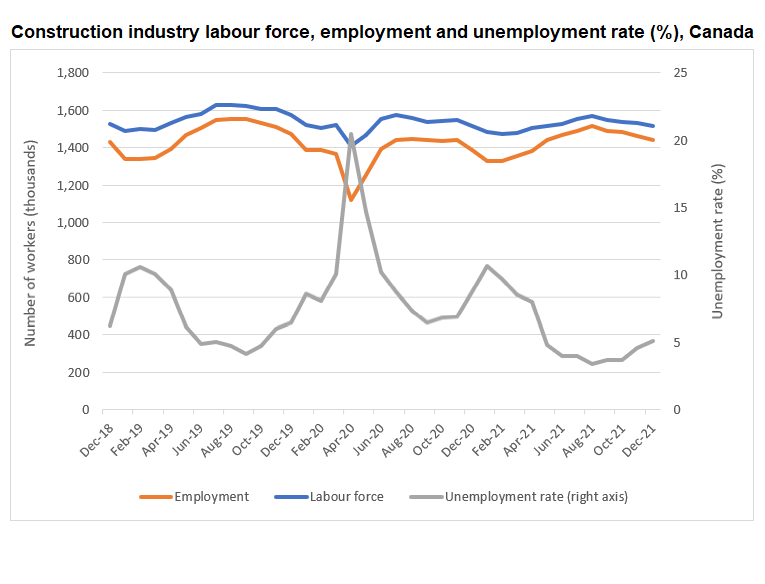 The remaining provinces reported annual employment gains of 6% or less.

Construction’s national unemployment rate increased by 0.5 percentage points to 5.1% in December, but remains 3.6 percentage points below December 2020 levels and 1.4 points below 2019 levels. Most provinces saw increases in their industry unemployment rates in December, with only Nova Scotia, Alberta, British Columbia, and Ontario reporting decreases.

Finally, national hours worked increased in December, rising 1.9% from November levels. Newfoundland and Labrador (-12.9%), Ontario (-2.2%), and Alberta (-1.2%) were the only provinces to report month-over-month declines. British Columbia reported a sizeable increase of 14.5%, while the other provinces reported more modest gains.

Compared to December 2020, total hours worked increased 6.6%. Hours have yet to return to pre-COVID levels but are within 1.5% of those reported in December 2019.