Construction employment declined in January, but remains well up from 2021 levels

Construction employment took another step back in January, shedding 55,000 jobs (-3.8%). It was the fifth consecutive month in which industry employment contracted; a fact largely due to the seasonal nature of many of its sub-sectors.

Statistics Canada reported the findings on February 4 in its most recent Labour Force Survey, which was conducted during the week of January 9 to 15, when governments across the country had tightened public-health measures in an effort to slow the spread of the COVID-19 Omicron variant.

At that time, capacity limits and closures had been re-introduced in retail stores and high-contact settings such as restaurants, bars, concert halls, and gyms. Schools in several jurisdictions had also switched to online learning.

Those restrictions combined to reduce seasonally adjusted, all-industry employment by 200,000 workers (-1%) for the month, and increased the national unemployment rate by 0.5 percentage points to 6.5% – the first such increase since April 2021.

Although construction employment has been trending downward since August 2021, key metrics remain favourable when compared against those of previous years. Employment in January, for example, was 4.2% higher (55,900 workers) than a year previous and remains only marginally lower (-2,200 workers or -0.2%) than in January 2020. 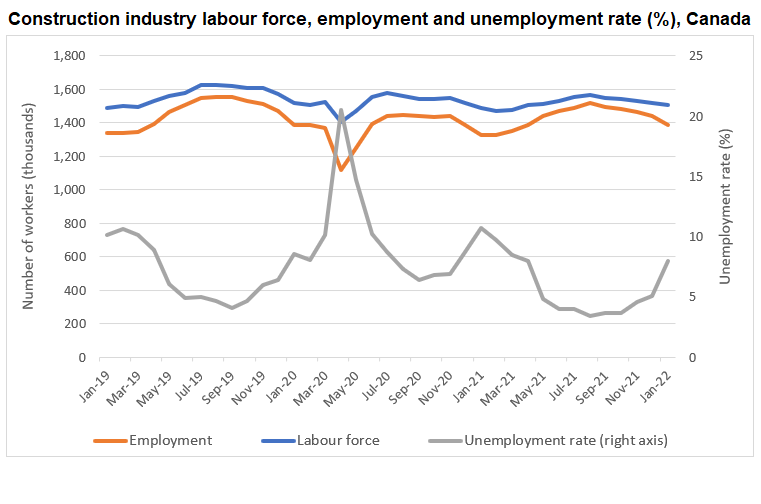 Every province but for Saskatchewan (0.2%) and Prince Edward Island (unchanged) saw employment declines in January. Newfoundland and Labrador experienced the steepest drop at 21%, followed by New Brunswick (-10.9%) and Quebec (-8.9%). The remaining provinces reported month-over-month declines of less than 4%.

However, when compared against January 2021 levels, employment in most provinces is up year over year. New Brunswick (28.5%), Saskatchewan (17.7%), and Prince Edward Island (10.7%) recorded the greatest gains, while the remaining provinces each saw gains of less than 10%. Only Newfoundland and Labrador (-5.2%), British Columbia (-2.5%), and Nova Scotia (-1.5%) reported year-over-year employment losses in January.

Compared to January 2021, Newfoundland and Labrador, British Columbia, and Manitoba are the only provinces to report higher rates of unemployment.

Construction’s labour force shrank for the fifth consecutive month; a fact very much in keeping with the industry’s seasonal slowdown. Nearly 12,000 workers left the industry in January, bringing the sector’s labour force to 1,504,400. This represents a decline of 64,600 workers since August.

The January 2022 labour force is 17,000 workers (1.2%) higher than in January 2021 but remains approximately 1% below pre-COVID January 2020 levels. Labour force gains were reported across the country, apart from in Nova Scotia, Alberta, and British Columbia.

Finally, increased absences due to the spread of the Omicron COVID-19 variant, coupled with the typical slowing of certain construction segments in the winter months, led to a decline in hours worked in January (-14%). All provinces except Prince Edward Island experienced declines.