Employment gains were widespread in February, with 337,000 jobs added on a seasonally adjusted basis across most industries.

Statistics Canada conducted its latest Labour Force Survey during the week of February 13 to 19, at a time when most public health measures pertaining to the spread of COVID-19 had been eased. 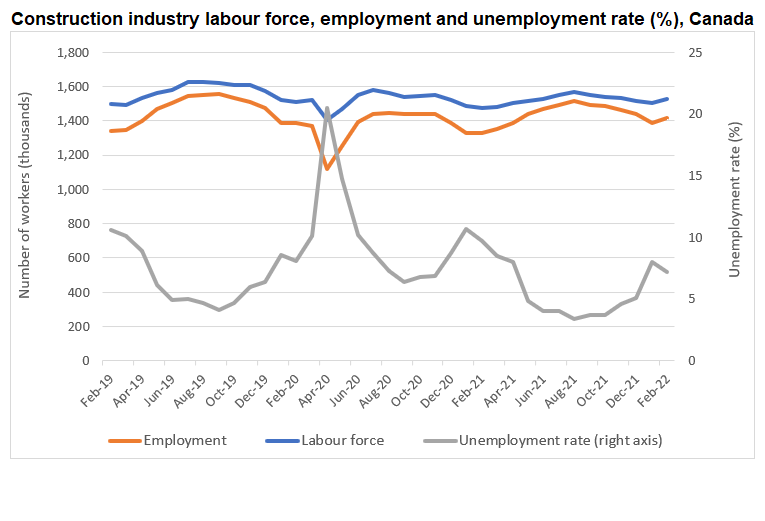 Employment gains were recorded in all provinces except Saskatchewan and Manitoba, where employment held steady near January levels. Newfoundland and Labrador experienced the largest increase at 13.2%, while Nova Scotia (+7.9%) followed. The remaining provinces reported month-over-month gains of up to 3%.

Most provinces also saw employment gains compared to February 2020. Notable among them were Saskatchewan (+15.1%), Nova Scotia (+14.8%), and Quebec (+9.7). British Columbia (-14.3%) and Newfoundland and Labrador (-4.6%) were the only provinces to remain significantly below pre-COVID levels.

Construction’s month-over-month unemployment rate, meanwhile, fell by 0.8 percentage points to 7.2% in February. The rate now remains 2.5 percentage points below February 2021 levels and one point below 2020 levels.

The construction labour force expanded for the first time since August 2021, with 20,700 workers joining or returning to the industry in February. The increase brought the sector’s labour force to 1,525,100. That figure is 52,500 workers or approximately 3.6% higher than in February 2021, and approximately 1% higher than pre-COVID February 2020 levels. All provinces apart from Alberta, British Columbia, and Manitoba reported year-over-year labour force gains.

Finally, national hours worked increased by 8.8% in February, and by 13% compared to February 2021 levels. Newfoundland and Labrador (+35.4) and New Brunswick (+30.8%) experienced the most notable year-over-year increases, while Manitoba was the only province to report a reduction in hours worked (-1%).

Compared to 2020, total hours worked were 2.4% above pre-COVID February levels.