Construction has been a major driver behind Canada’s recent employment boom.

Data from Statistics Canada’s March 2022 Labour Force Survey (LFS) shows that in the six months since September 2021, when all-industry employment returned to its pre-pandemic level, construction has accounted for nearly one quarter of the new jobs created.

Statistics Canada gathered data for this most recent LFS during the week of March 13 to 19. Since the February reference week, provinces have continued to ease public health restrictions. Most notably, all capacity limits and proof-of-vaccination requirements were lifted in Ontario, Manitoba, Alberta, and Quebec prior to the March reference week. 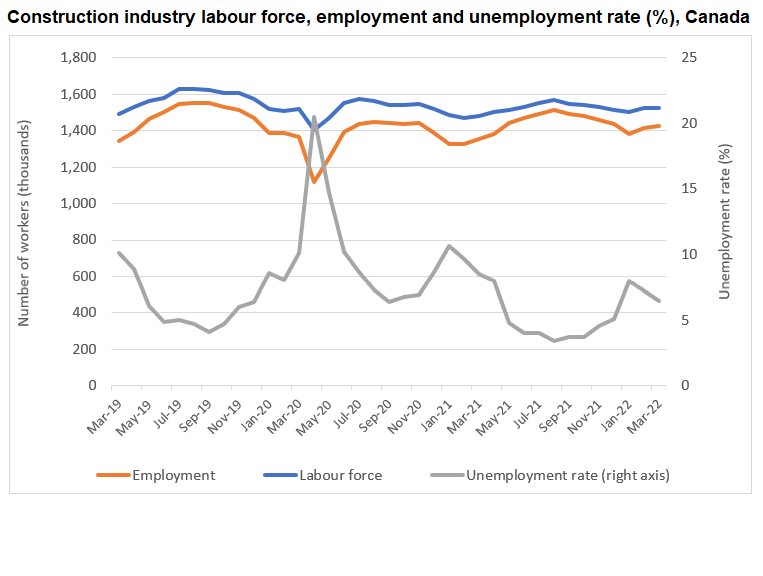 On a seasonally adjusted basis, construction employment rose by 14,000 workers in March – the fourth month in a row in which the industry has added workers. Nearly all of the gains were reported in Ontario. The unadjusted data shows that in the first quarter of the year, construction (+24,000) accounted for just under half of the total all-industries net employment gains (+49,000) among core-aged men who belong to a population group designated as a visible minority; further evidence of the industry’s commitment to diversifying its labour force.

The recent upward trend in the number of people working in the industry has occurred alongside steady investment growth in building construction since the fall of 2021.

Seasonally unadjusted numbers for the construction industry nationally show that employment rose by 13,500 (+1%) workers in March, adding to the gains reported in February. Employment in March was 5.5% higher (+74,800 workers) than in March 2021, and 4% higher (+58,400 workers) than the March 2020 level – when governments first began introducing COVID-related lockdowns.

Employment gains were evident across the Eastern and Central provinces. Prince Edward Island (+12.7%) and New Brunswick (+5.9%) recorded the largest increases, while the other provinces reported gains of less than 2%. Employment levels in Western Canada and the Prairie provinces, meanwhile, were lower or unchanged from February. These declines, however, were marginal, at less than 1%.

Compared to 2021, March employment levels were lower in Manitoba (-4.9%), British Columbia (-2.8%), and Alberta (-0.5%). These provinces, in addition to Newfoundland and Labrador, were also the only ones to see employment remain significantly below pre-COVID levels. The rest of Canada reported increases in employment over the previous year, with New Brunswick (+41.2%) and Prince Edward Island (+20.3%) reporting the largest gains. The remaining provinces reported gains of up to 12%.

Manitoba saw its construction unemployment rate rise by four percentage points in March. Rates fell or remained constant across the rest of Canada. Newfoundland and Labrador experienced the largest decline in percentage points (-3.5%), followed by Prince Edward Island (-2.6%) and Quebec (-2.2%). The provincial unemployment rate in March was at or below March 2021 levels for most provinces, with Prince Edward Island and Manitoba being the only provinces to report higher rates of unemployment, year over year. Manitoba was also the only province to report higher unemployment levels compared to March 2019.

Finally, national hours worked rose by 3.7% in March. Consistent with the trends in employment, Manitoba reported a decline of 7.3% in hours worked. At less than 1% each, Nova Scotia and Prince Edward Island also reported marginal declines.