The survey data for April was released on May 6. It covers labour markets for the week of April 10 to 16 – a point when most remaining capacity limits affecting business operations had been lifted, although some combination of masking, proof of vaccination, or testing remained a requirement in some settings in certain jurisdictions.

The data shows that all-industry seasonally adjusted employment grew by just 1,000 jobs, while the overall national unemployment rate dropped by another 0.1 percentage points to a new record low of 5.2%.

Other metrics suggest further tightening of the labour market. For example, the adjusted unemployment rate – which includes people who wanted a job, but did not look for one – was 7.2% in April, below the pre-pandemic level of 7.4%. Meanwhile, at 4.3%, the unemployment rate for core-aged workers reached its lowest-ever recorded rate. 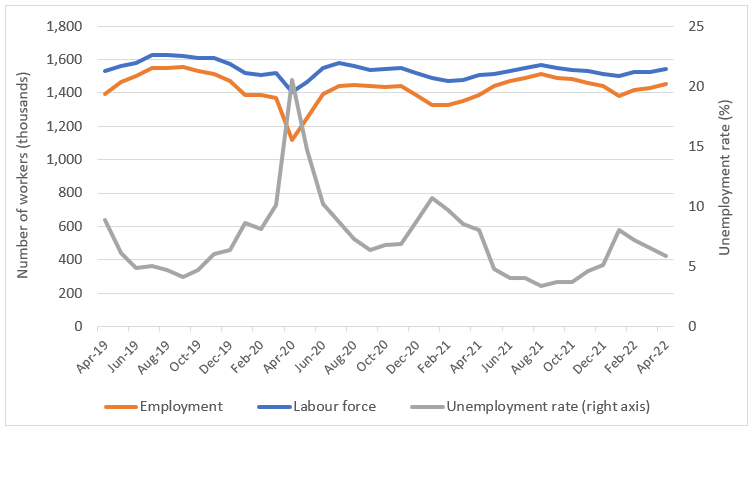 Most provinces reported construction employment gains compared with March. Newfoundland and Labrador reported the most significant at 13.6%, while the remaining provinces reported gains of less than 5%. Quebec, Manitoba, and Prince Edward Island reported marginal declines or no changes, while Saskatchewan reported a drop of 1.6%.

Compared to April 2021, construction employment levels were lower in Manitoba (-5.5%) and British Columbia (-2.4%), and largely unchanged in Alberta, Saskatchewan, and Quebec. The rest of Canada reported considerable year-over-year gains in employment, with Newfoundland and Labrador (+44%), New Brunswick (+37.9%), and Prince Edward Island (+26.8%) reporting the largest gains.

Nova Scotia was the only province to report a notable rise (+2.1 percentage points) in its construction sector unemployment rate in April. The rate fell or remained largely unchanged across the rest of Canada. Newfoundland and Labrador experienced the largest decline in percentage points (-6%), followed by New Brunswick (-3.4%).

The construction labour force continued to expand in April, with 15,300 workers joining or returning to the construction industry. The increase brings the sector’s labour force to 1,542,600. That figure is notably higher (+37,400 workers) than April 2021, and identical to April 2019.

Despite gains in employment, national hours worked declined in April, falling 5% from March levels, driven in part by a spike in illness-related absences from work, as a sixth wave of COVID-19 peaked in many provinces in April. Blizzard conditions in Manitoba during the April reference week also contributed to the decline.