Across the country, unemployment rates are at or near all-time lows, job vacancy rates are among the highest they have ever been, and employment continues to grow.

Statistics Canada released data from its May Labour Force Survey (LFS) on June 10. The study looked at labour markets across the country during the week of May 15 to 21. Overall, it found that all-industry seasonally adjusted employment rose by 40,000 (+0.2%) workers, while the national all-industry unemployment rate dropped by 0.1 percentage points to 5.1%. May was the third month in a row in which that metric has reached a new record low.

Additionally, in its March 2022 look at payroll employment, earnings and hours, and job vacancies, Statistics Canada reported that the national job vacancy rate reached a record high of 7.3%. Employers across the country were seeking to fill more than one million vacant positions at the beginning of that month.

Construction continues to be among those industries to report gains in employment, increases in job vacancies, and lower unemployment rates. 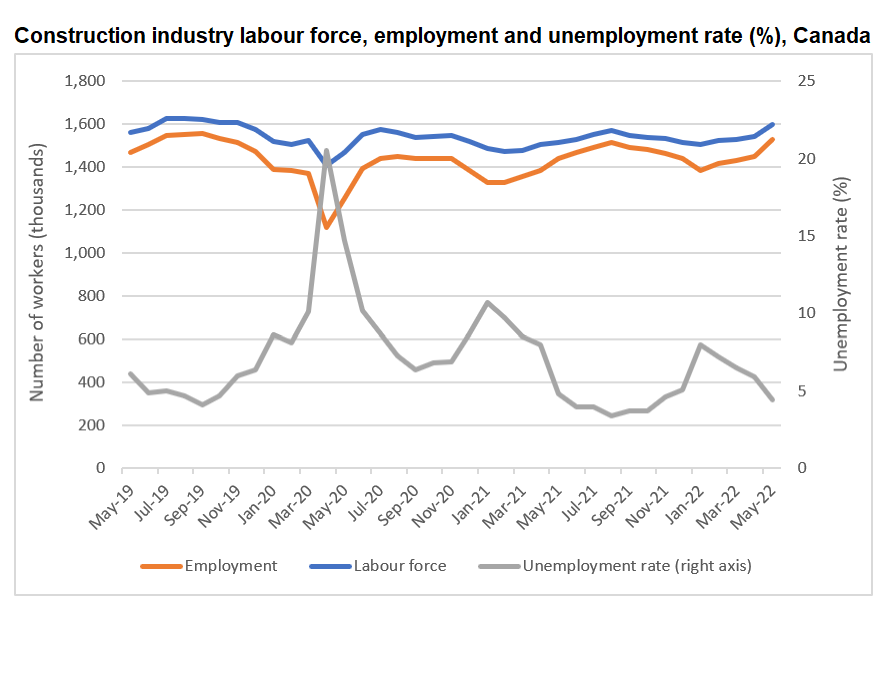 Employment gains were evident across Canada. While Ontario reported a marginal monthly increase of less than 1%, every other province reported increases between 4.7% (Alberta) and 15.6% (New Brunswick).

Alongside Newfoundland and Labrador and British Columbia, Alberta and Manitoba were also the only provinces in which employment remains significantly below pre-COVID levels.

At 7.3%, the industry’s job vacancy rate has reached its highest-ever level. At the beginning of March, Statistics Canada reported that construction employers across the country were looking to fill an unprecedented 81,900 job vacancies.

British Columbia was the only province to report a notable rise in the rate of unemployment in May, increasing 1.3 percentage points from April levels. Rates fell or remained largely unchanged across the rest of the country. Prince Edward Island (-8.7) and Manitoba (-5.5) experienced the largest percentage-point declines, as employment gains in both provinces outpaced labour force growth.

Unemployment rates in most provinces were at or below those rates reported in May 2021. Only Newfoundland and Labrador (+2.4%), Alberta (+1.5%), and British Columbia (+0.7%) reported increases this year.

The construction labour force continued to expand in May, with 55,600 (+3.6%) workers joining or returning to the construction industry. The increase brought the sector’s labour force to just under 1.6 million – a level not seen since November 2019. May’s labour force was 84,000 workers (+5.5%) higher than a year previous, and 24,400 workers (+1.6%) higher than the May 2019 level. Newfoundland and Labrador, British Columbia, Manitoba, and Alberta are the only provinces to continue to report lower totals of labour force workers compared to pre-COVID levels.