New Labour Force Survey (LFS) data released by Statistics Canada on July 8 shows a seasonally unadjusted increase of 53,300 workers (+3.5%) in construction in June. The jump brings the number of people employed in the industry to 1,580,600 – the most on record.

The June LFS data covers labour markets during the week of June 12 to 18. It also shows that all-industry seasonally adjusted employment declined for the first time since January 2022. June’s decline of 43,000 workers (-0.2%) offsets the increase of 40,000 reported in May. The employment loss was almost entirely due to a decrease among workers aged 55 and older.

The all-industry national unemployment rate dropped again in June – by 0.2 percentage points to 4.9%. June is the fourth consecutive month in which this key labour market indicator has reached a new record low. 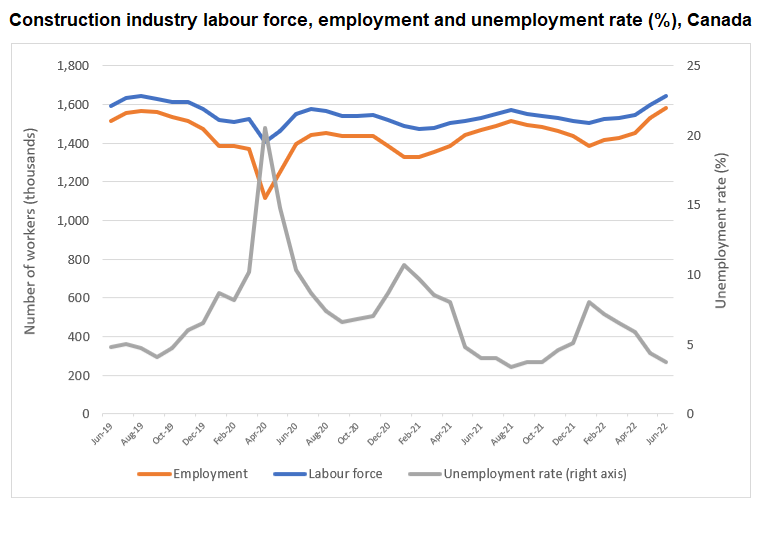 Employment gains varied across provinces, ranging from a low of 1% for Saskatchewan to a high of 9% for Newfoundland and Labrador. Compared with June 2021, only Manitoba (-2.3%) reported lower employment figures. All other provinces reported year-over-year gains in employment, led by Prince Edward Island (+42.6%), New Brunswick (+23.3%), and Nova Scotia (17.6%). The remaining provinces reported gains of up to 11%.

Nova Scotia was the only province to report an increase in provincial construction unemployment in June. The province’s rate rose 1.2 percentage points from May, while the rates in all other provinces either fell or remained largely unchanged for the month. Newfoundland and Labrador recorded the largest percentage-point drop at -10.8.

Unemployment levels in June were at or below June 2021 levels in most provinces. Only Nova Scotia (1.2 points) and Quebec (1.3 points) reported year-over-year increases. British Columbia continues to be the only province to report unemployment levels higher than those of pre-pandemic June 2019.

Construction’s overall labour force reached a new high of 1,641,600 workers in June – an increase of 43,400 compared to the month previous. The labour force now counts 112,500 more workers (+7.4%) than it did a year ago, and 51,500 (+3.2%) more than it did in June 2019. Newfoundland and Labrador, British Columbia, Manitoba, and Alberta have yet to see their respective construction labour forces return to pre-pandemic levels.

Finally, hours worked across the construction sector rose again in June, increasing 4.7% from May levels.

Manitoba and Newfoundland and Labrador reported the largest increases in hours worked in June – at 13.0% and 12.5% respectively. The remaining provinces reported monthly gains of between 1.9% (Alberta) and 8.4% (Nova Scotia).