Although the findings in Statistics Canada’s Labour Force Survey (LFS) for July, which covered the period of July 10 to 16, show a slight dip in all-industry employment from the month previous (-31,000 workers, seasonally adjusted), the survey also shows that the national unemployment rate – at 4.9% – has never been lower. Moreover, at the beginning of May, employers across the country were looking to fill more than one million vacant positions – an increase of 42% over the year previous.

Statistics Canada’s LFS data also found that, even with the tight labour conditions, workers were no more likely to switch jobs than in previous years. The job-changing rate – which measures the proportion of workers who remain employed from one month to the next but who change jobs between months – was 0.6% in both June and July. That figure is almost unchanged from the 0.7% average seen between 2016 and 2019. 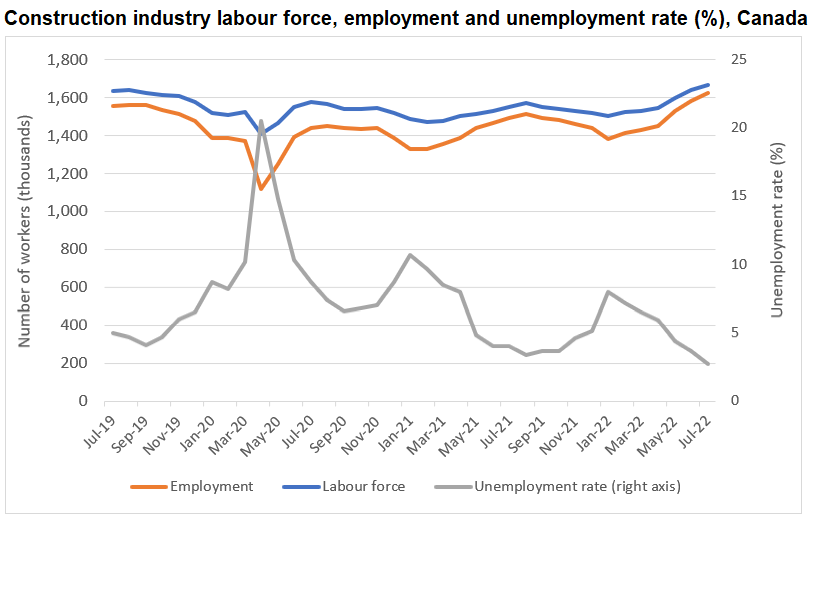 Most provinces recorded employment gains in July, ranging from modest increases of 1.6% in New Brunswick to highs of 5.9% in Manitoba and Nova Scotia. Conversely, Prince Edward Island (-1.1%) and Saskatchewan (-0.6%) both experienced slight declines. All provinces reported higher year-over-year levels of employment, with Prince Edward Island (+43.3%), New Brunswick (+22.8%), and Nova Scotia (18.0%) leading the way. Meanwhile, only Saskatchewan, Manitoba, Newfoundland and Labrador, and British Columbia continue to report employment figures below those seen prior to the COVID-19 pandemic.

The unemployment rate fell or remained largely unchanged in every province except New Brunswick (+1.8 points) in July. Nova Scotia experienced the largest decline at -2.9 points, followed by Saskatchewan at -2.5 points.

Finally, national hours worked also increased in July – by 0.2% compared to June levels. The comparatively small increase in the number of hours worked could be attributed to a greater number of employees missing work due to illness and disability as workers and employers contended with the seventh wave of COVID-19.