A contraction in all-industry national employment numbers in August has not helped to ease tight labour markets.

The largest share of those declines was concentrated among youth aged 15 to 24 years and older people aged 55 to 64 years. And while several industries, including “other services” and professional, scientific, and technical services reported gains, those increases were more than offset by declines in educational services and construction.

The national all-industry unemployment rate rose by 0.5 percentage points to 5.4%. 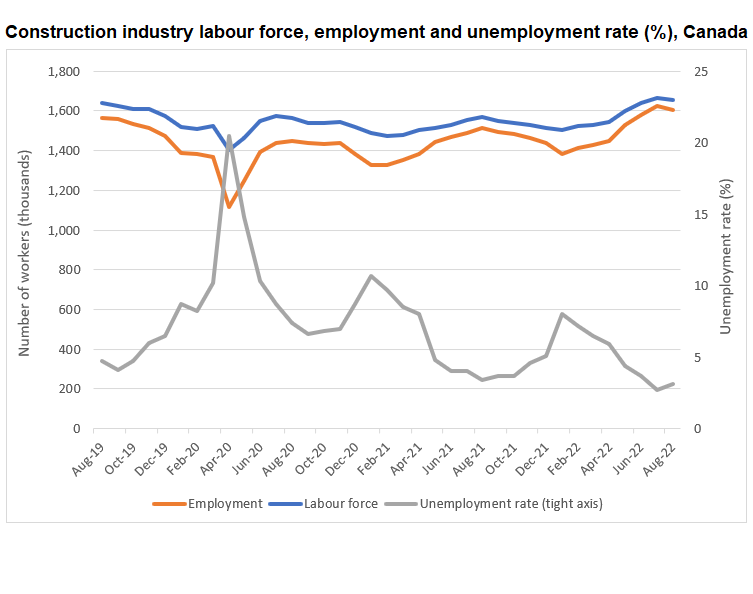 Meanwhile, construction activity – as measured by the value of building permits – continues to soar. Statistics Canada data shows that the value of building permits issued through the first seven months of 2022 was $82.6 billion. That figure is $9.2 billion (+12.6%) higher than the $73.3 billion worth of permits issued for construction over the same period in 2021. All sectors showed gains.

Building construction investment activity is also significantly higher for the first seven months of 2022 compared with the same period a year ago. Overall investments level between January and July of this year reached $136.9 billion. That figure is approximately $14 billion (+11.3%) higher than the $122.9 billion reported in the first seven months of last year. As with building permit values, all sectors showed gains.

As a likely combination of rising demand and constrained labour supply, construction continues to report elevated numbers of job vacancies. Employers reported more than 89,000 job openings in June. That figure was little changed from May.

Employment declines in most provinces

The monthly unemployment rates rose in all provinces except British Columbia in August.

British Columbia’s rate declined to 1.7%, while Saskatchewan and Ontario also recorded unemployment levels below the 3.1% national average at 2% and 2.6% respectively.

Newfoundland and Labrador registered the sector’s highest unemployment rate at 11.4% in August. New Brunswick and Nova Scotia followed at 6.5% and 4.7%, respectively.