The latest Labour Force Survey data published by Statistics Canada shows a contraction of 79,000 workers (-0.4%) between May and September.

In its second quarter look at the trend, Statistics Canada finds that employers across all sectors of the economy were actively looking to fill 997,000 vacant positions, with construction employers looking to fill nearly 83,000 of those positions. Both figures are among the highest on record.

Statistics Canada collected its September LFS data during the week of September 11 to 17. The data finds a slight increase (+21,000) in all-industry seasonally adjusted employment. It also shows an increase in average hourly wages across nearly all industries – including construction (+7.5%) – for the month.

The construction sector continues to report labour force challenges of its own. 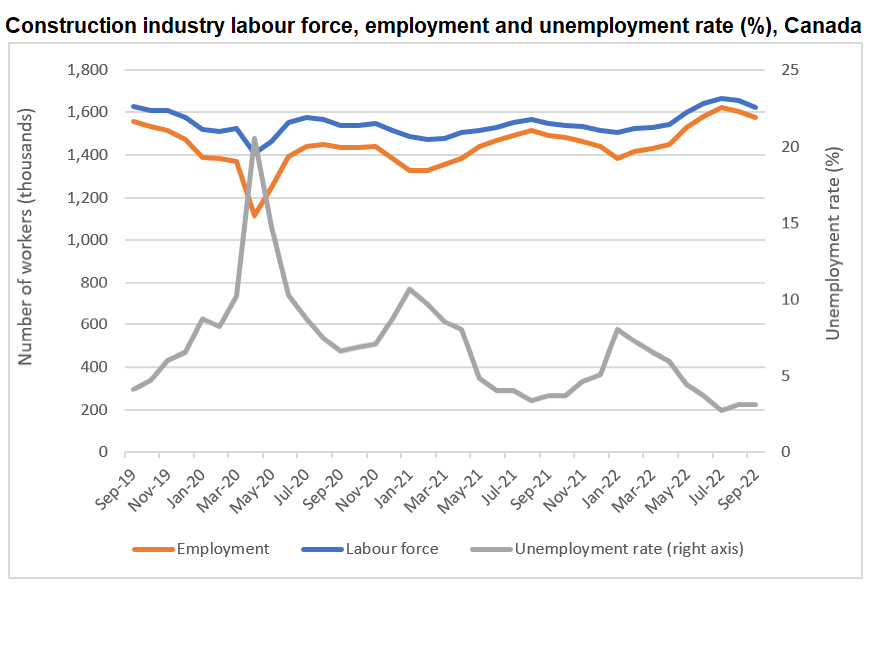 All provinces except Newfoundland and Labrador (+5.1%), Nova Scotia (+2.1%), and Alberta (+0.1%) reported declines in employment in September. At -2.7%, British Columbia’s decline is noteworthy. The drop offsets gains reported in August and brings the province’s sectoral employment back to below pre-pandemic levels. Ontario, Quebec, New Brunswick, and Nova Scotia were the only provinces to report higher employment levels than those registered prior to the onset of the pandemic.

Most provinces reported little or no changes in their respective unemployment rates in September. Five – British Columbia, Ontario, Manitoba, Quebec, and Alberta – reported unemployment levels below the 3.1% national average, while Newfoundland and Labrador maintained the sector’s highest unemployment rate at 11.6%.

Saskatchewan, Nova Scotia, and Newfoundland and Labrador are the only provinces to report higher unemployment levels compared to pre-pandemic levels.