The latest Labour Force Survey (LFS) published by Statistics Canada shows a broad but modest increase in employment across the country in October. Statistics Canada collected its LFS data during the week of October 9 to 15.

Seasonally adjusted data shows an increase in employment of 108,000 (+0.6%). The increase—which was widespread across industries, including manufacturing, construction, and accommodation and food services—brought employment back to a level on par with the most recent peak observed in May 2022.

Statistics Canada attributes the increase in employment to a number of factors, including an increasing trend of immigrants and permanent residents in finding employment and filling job vacancies. LFS data shows that, at 62.2%, the employment rate of immigrants aged 15 and older was at its highest-ever October level. Additionally, at 70.7%, the employment rate among those people who were admitted to Canada within the last five years was 5.6 percentage points higher than in October 2019.

Meanwhile, the national, all-industry unemployment rate held steady at 5.2% in October. That figure is 0.3 percentage points above the record low of 4.9% reported in June and July and is a clear indicator that labour markets across the country and in nearly all industries remain constrained.

Construction labour markets remain constrained
Construction continues to grapple with its own labour force challenges, even as the calendar turns to the fourth quarter of the year, when workloads conventionally slow. Indeed, the latest building permit data reported by Statistics Canada, for September, shows a drop in the value of building permits of 22% compared to the previous month. 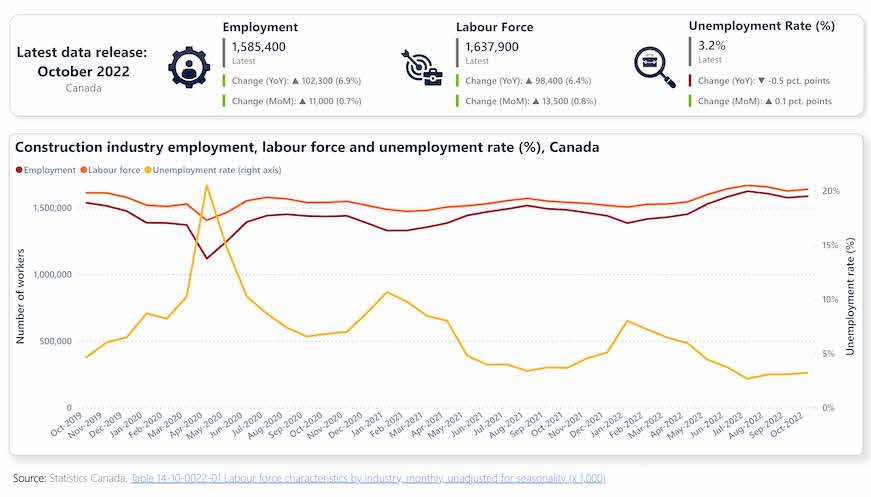 October marks the third month in a row in which construction’s unemployment rate has increased. The rate grew from 3.1% in September to 3.2% in October. Even taking the increase into account, labour markets remain historically constrained. The national unemployment rate remains below 2021’s low of 3.7% and well below the five-year average of 4.6% for October.

Five provinces reported unemployment rates below the national figure in October: Manitoba (3.1%), Ontario (2.7%), Quebec (2.4%), British Columbia (2.1%) and Prince Edward Island (1.3%). Newfoundland and Labrador (15.1%), New Brunswick (7.8%), and Saskatchewan (5.7%) all reported rates above the national figure.
Finally, job vacancies in the construction sector continue to remain about the 82,000-mark. Across all sectors of the economy, employers were looking to fill a combined 958,500 jobs at the end of August.