Seasonal trends may be beginning to take hold in construction’s labour market.

Statistics Canada released data from its November Labour Force Survey on December 2. The survey, which covers the period from November 6 to 12, showed that both construction employment (-47,000; -3.0%) and the industry labour force (-45,000; -2.7%) contracted in November. As a result, the industry’s unemployment rate increased – slightly – to 3.4%.

Although construction’s labour market remains constrained, with the industry unemployment rate remaining near historic lows and job vacancies approaching historic highs, positive signs may be emerging. Since August, the industry’s labour force and employment levels have moved nearly in parallel. This may be a sign that industry labour markets are finally achieving greater equilibrium.

The stability in overall total employment was the result of offsetting movements across multiple industries. Gains in the financial, insurance, real estate, manufacturing, information, cultural, and recreation sectors were offset by declines in construction, as well as wholesale and retail trade.

Overall, the national rate of unemployment declined by 0.1 percentage points – to 5.1%.

Seasonal trends reduced construction employment across most provinces in November.

At 1,200 workers (+6.1%), Newfoundland and Labrador was the only province to add workers for the month. All other provinces recorded employment declines, with Alberta, Saskatchewan, Prince Edward Island, Nova Scotia, and New Brunswick all reporting contractions of at least 6%. Employment decreases in Ontario and Manitoba were less than 1%.

British Columbia, Manitoba, Ontario, and Quebec also continued to experience tightness in their respective labour markets, with unemployment rates reaching 2.7%, 2.9%, 2.5%, and 3.0%, respectively. All other provinces reported unemployment rates above the national industry rate of 3.4%. Provincial unemployment rates were highest in Newfoundland and Labrador (12.9%) and Prince Edward Island (10.7%). 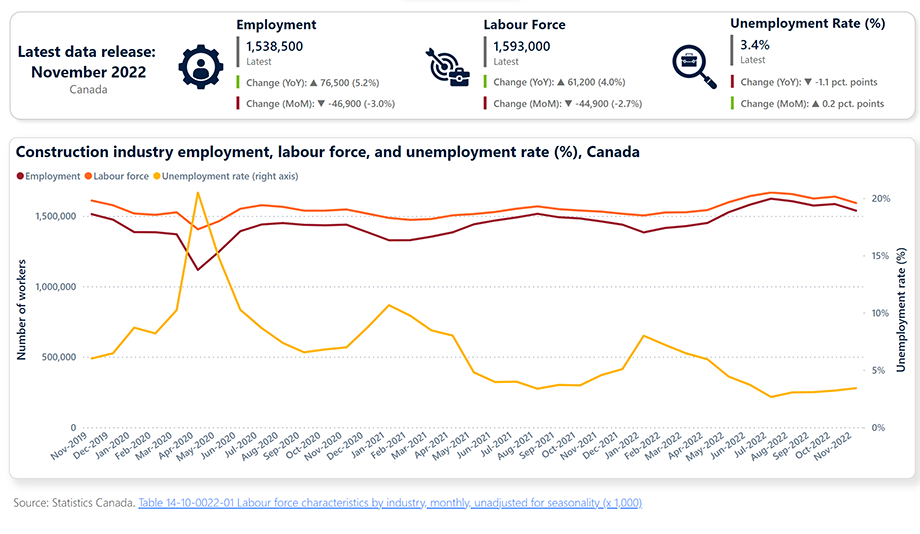 Compared with November 2021, employment increased in all provinces but Saskatchewan (-1,600; -3.7%) and Alberta (-4,200; -1.9%). Newfoundland and Labrador, Prince Edward Island, and British Columbia all experienced gains of at least 11%, while Nova Scotia, Manitoba, Ontario, and Quebec recorded gains of at least 5%.

Over the same period, all provinces except Saskatchewan (-6.2%) and Alberta (-3.5%) reported gains in their respective labour forces. Year-over-year increases ranged from 13.8% in Prince Edward Island to 4.6% in Ontario.