The national construction labour market ended 2022 with increases in employment and labour force figures and a drop in unemployment.

Labour Force Survey (LFS) data released by Statistics Canada on January 6 confirms further increases in the number of people working in the construction sector (+5.4%; +77,600), the size of the industry’s labour force (+4.8%; +73,000), and further contractions (-0.5 percentage points; 4.6%) in its unemployment rate, when compared with December 2021. 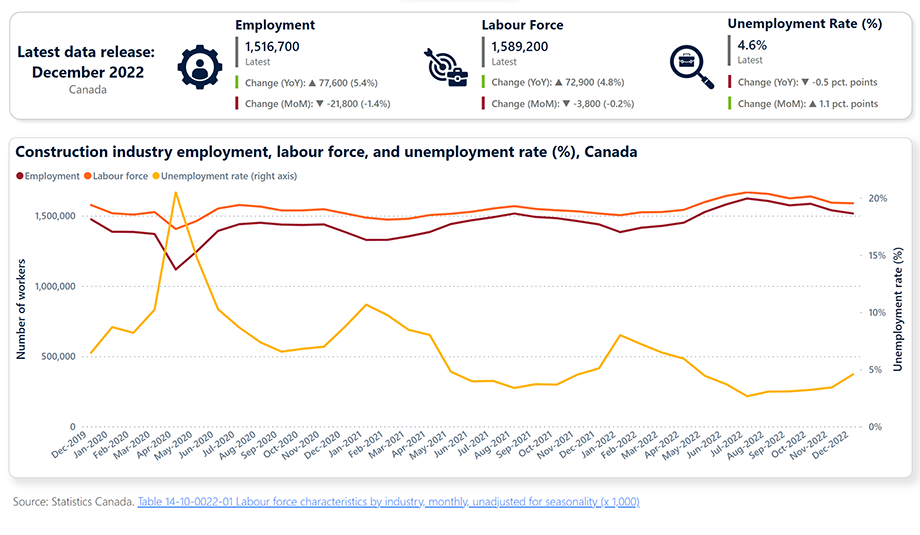 Statistics Canada gathered data for its December LFS during the week of December 4 to 10.
December’s data provides further evidence that the industry continues to grow at a faster pace than its workforce may be able to currently sustain. Indeed, data from Statistics Canada show an increase of $2.5 billion (+13%) in the value of building construction investment for the first 10 months of the year compared with the same period last year, and an increase of approximately $10 billion (+9.5%) in the value of building permits over the same period.
The number of job vacancies in the industry, meanwhile, stood at 71,380 at the end of October

A closer look at the data shows that nearly every province reported increases in employment and labour force growth in 2022.
Employment gains were strongest in Nova Scotia, which reported an increase of 16.4% (+5,600) for the year. Prince Edward Island (+12.9%), Newfoundland and Labrador (+11%), and Manitoba (+9.5%) followed. Ontario reported the greatest absolute employment gain, adding 43,900 workers (+8%) for the year. Saskatchewan, meanwhile, reported a contraction of 5,100 workers (-11.8%).
Labour force gains were also strong in all provinces except Saskatchewan, which reported a contraction of 6,500 workers (-14%) over the last 12 months. Nova Scotia, meanwhile, reported an increase of 6,700 workers (+19%), with New Brunswick and Ontario (both +8%), and British Columbia and Manitoba (both +7%) following suit.
Compared with December 2021, unemployment rates decreased in six provinces. Prince Edward Island reported a drop of 8.5 percentage points to end December 2022 at 5.4%, while Newfoundland and Labrador reported a drop of 5.3 percentage points to 17%, and Saskatchewan reported a drop of 2.1 points to 6.2%. The other four provinces reported increases of 2 percentage points or less.

Although year-over-year data shows continued growth among most key construction metrics, trends reported between November and December were mixed.
National construction employment declined by 21,800 workers (-1%) in December as the industry continued expected seasonal contractions. The labour force also contracted, although at a rate of just -0.2%, or -3,700 workers. As a result, the industry’s unemployment rate rose from 3.4% in November to 4.6% in December.
Five provinces reported contractions in their respective labour forces in December. Quebec reported the largest absolute contraction for the month, shedding 10,100 workers or (-3%), with Saskatchewan (-3,600; -8%), and Newfoundland and Labrador (-2,200; -9%) following suit. Among those provinces reporting monthly labour force increases, Alberta led the way with an increase of 8,700 (+4%) with Ontario reporting an increase of 4,100 workers (+1%).
All but two provinces (Alberta +4,300 and Ontario +600) reported employment contractions in November. Newfoundland and Labrador had the largest percentage decline (2,700 workers; -13%) for the month, with declines in Saskatchewan (-3,800; -9%) and Quebec (-14,400; -5%) coming in at slightly lower levels.
All provinces experienced increases in their respective unemployment rates from November to December.
‹ Previous