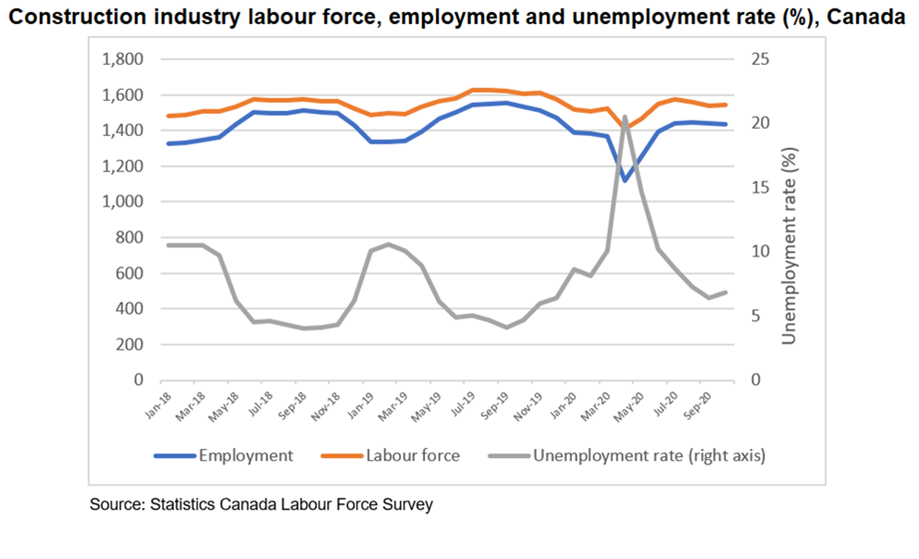 Labour market numbers for individual provinces remain mixed, with only Manitoba and Ontario experiencing declines in month-over-month unemployment in October. The construction unemployment rate was lowest in Manitoba (3.6%), Nova Scotia (3.7%), Prince Edward Island (4.3%), and Ontario (4.6%), and highest in Newfoundland and Labrador (18.4%), Alberta (10.1%), and Quebec (7.3%).

At 8.5%, Newfoundland and Labrador recorded the highest percentage increase in month-over-month employment, though numbers remain 11.6% below levels seen in October 2019. Ontario employment inched up 1% in October, but remains 6.1% below numbers recorded in October 2019. Employment in British Columbia continues to lag, declining 1.1% from 200,300 in September to 198,100 in October, despite initial projections of a stronger-than-average recovery and limited impacts on the industry resulting from COVID-19 emergency measures.

Employment numbers are being driven in part by housing investment, which remains strong in most provinces. Statistics Canada reports that housing starts are up from 59,182 in Q3 2019 to 62,931 in Q3 2020. The total number of units under construction is also up, rising from 267,286 in Q3 2019 to 279,195 in Q3 2020. However, numbers show that year-to-date investment levels combining residential and non-residential sectors are down from 2019. From January to August 2019, total investment in construction reached $113.5 billion, while investment currently lags at $109.4 billion in 2020.

Other Statistics Canada data highlights the importance of the construction sector to the Canadian economy. The latest data for August reveals that the annualized construction industry contribution to gross domestic product (GDP) is now $142.34 billion, which is up slightly to 7.5% of GDP due to weakness in other sectors.