Building a foundation of respect - Part 68 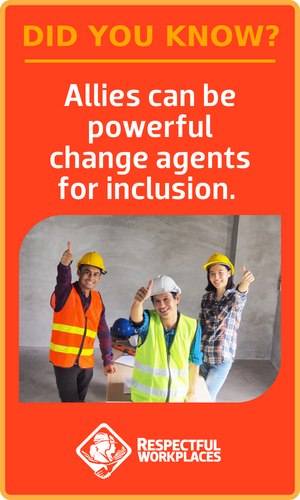 In a global study of more than 600 respondents, 70% of those in leadership positions said that creating an inclusive workplace is a strategic priority for their organization, yet only 43% said they were on track to achieve their goals.

According to Sheree Atchison, author of Demanding More: Why Diversity and Inclusion Don’t Happen, in order to make the necessary culture change, the majority must help, support, and advocate for the minority. If engaged correctly, allies hold the power and the key to accelerate positive change.

Allyship is more than showing sympathy toward discriminated individuals. Allies will actively facilitate positive change, such as helping to create more employment opportunities for those who experience barriers to success. It is a life-long process of building relationships based on trust, consistency, and accountability with members of outsider groups.

Everyone, regardless of their social identity, can be an ally because privilege is intersectional. “Privilege” is defined as a special right or advantage based on specific social identities. Those who have privilege can have a disproportionate ability to influence social outcomes.

Privilege does not mean that you haven’t worked hard to get where you are or that you have not faced hardships in your life. Rather, privilege describes all the invisible benefits you have had that opened doors to opportunities or success. For example, speaking the local language as your first language represents an aspect of privilege.

Because privilege is intersectional, anyone can be an ally to a member of another social identity group. People usually have more than one social identity. For example, a person can be male, Black, and able bodied or white, gay, and differently abled, with each characteristic conferring different aspects of privilege. As a result, men can be allies to women, cisgender people (those whose sense of personal identity and gender corresponds with their birth sex) can be allies to those of the LGBTQ2S+ community, able-bodied people can be allies to those who are differently abled, and so on.

However, research shows that there is a disconnect between what people from insider groups believe are important allyship actions and what people from outsider groups say make the biggest impact. In addition, other research shows that many workers, even though they support allyship, will not speak up if they do not believe they have the support of their organization.

Leaders can play a key role in bridging the gap by demonstrating allyship and promoting it throughout their organization.

What can leaders do to demonstrate allyship and promote it throughout their organization?

1. Recognize your own privilege. Doing the inner work of self-discovery enables more effective outer work, the visible actions of allyship. Having uncomfortable conversations with yourself and understanding the systemic and societal issues which may have played in your favor is eye opening. This will allow you to understand the invisible barriers that may exist for members of outsider groups in your own organization.

2. Provide career growth opportunities without bias. Research shows that everyone holds unconscious bias. Even when we intend to be inclusive, often our unconscious bias can influence our behaviours. Re-think your usual patterns for identifying and grooming high-potential candidates to ensure they are not influenced by unconscious bias (see Blog #48 for a discussion of unconscious bias).

3. Be a sponsor for members of outsider groups. Being a sponsor is different than being a mentor: sponsorship is active involvement in aiding someone’s career progress, while mentorship is focused on providing advice. Research shows that those who have opportunities for career growth are more likely to be successful and stay at their organizations.

4. Call out inappropriate behaviour. Don’t permit biased behaviour to continue: call it out and make it safe for others to do the same. Creating a culture of psychological safety enables workers to speak up when they have questions or concerns. Speaking up describes the back-and-forth exchanges people have at work, from volunteering a concern to giving feedback to a co-worker. Research shows that when workers know that speaking up about bias or discrimination is supported, they are more likely to do so.

5. Identify and rectify systemic inequities in your organization. Unconscious bias can influence not only our personal interactions, but also the systems that we develop. It causes us to do what is most familiar and comfortable. To attract and retain different kinds of people, use different recruitment methods. Partner with organizations that advocate for job equity for members of under-represented groups. Be present at conferences and seek the honest feedback of under-represented people about which organizations they perceive to be welcoming. Use this information to rectify your recruitment and retention systems.

6. Empower everyone, at all levels, to be allies. Equip workers to use their privilege and power to support and advocate for people with less privilege to drive change. First, provide training so that workers recognize bias and discrimination. It can be difficult to recognize microaggressions and microinsults as discriminatory and the impact they have over the long term. Second, provide workers with the action steps that will make the most impact. Third, ensure that their allyship is supported and rewarded. Allyship is a change-management tool and needs to be aligned with reward systems to be effective.

Creating a respectful and inclusive workplace means that you have to change the workplace culture. And changing culture means you need all workers at every level to be active agents of change. Helping workers to recognize bias and discrimination and empowering them with the knowledge and support to be allies will accelerate the change. As a leader, demonstrating allyship and promoting it may be challenging, but it is a challenge worth taking.

Leaders and managers who want to unleash the power of allies in their organization could consider participating in the Working in a Respectful and Inclusive Workplace online course. It provides information for recognizing bias and discrimination and provides tools to empower allies to accelerate the progress toward a respectful and inclusive workplace.