Building a foundation of respect - Part 48

Does your organization understand the impact of leadership bias on its talent pipeline? 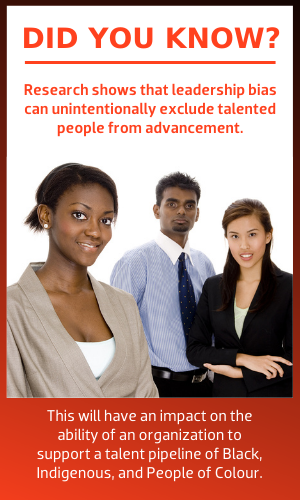 In the Deloitte “leader-led” model of inclusion, (see Blog #47), the first priority for an organization to become inclusive is to have a leadership team that understands the link between business success and an organization’s ability to recruit, retain, and advance the most skilled and capable workers from all talent pools.

To support the first priority, however, the “leader led” model acknowledges that leaders must be aware of their own biases and the assumptions they are making. Research shows that leaders and managers directly influence the performance of those who are subordinate to them. However, because of unconscious or unintentional bias, leaders and managers can behave in ways that limit the potential of talented individuals. This will have an impact on the ability of an organization to support a talent pipeline of Black, Indigenous, and People of Colour.

1. Bias and stereotypes influence the decisions and behaviour of leaders and managers.

Readers may remember that bias and stereotypes are reinforced automatically by our unconscious mind (see Blog #46). For example, priming bias occurs when we are “primed” to think more highly of a person when we know that a trusted colleague thinks highly of that person. This may lead a manager to be more available and grant attention to specific individuals based on the reports of others rather than on an independent assessment of the candidate’s suitability for promotion or good job assignments.

2. Bias and stereotypes create expectations, and a leader’s expectations have a direct impact on the performance of those subordinate to them.

Unconscious bias often results in a set of micro-behaviours: the small, and not so small ways that we behave toward others. For example, affinity bias occurs when we feel a higher level of comfort with those who are like us. This may lead a manager to unconsciously support the ideas of those with whom he or she has affinity with, or a manager may frequently go for coffee with the individuals most like them.

In contrast, a manager may engage in negative cues or “micro-aggressions” such as checking emails while in conversation with specific individuals he or she is not comfortable with, or cutting someone off in a meeting. Research shows that managers also give less immediate feedback on performance to those with whom they do not have affinity.

3. Bias, via “stereotype threat,” causes members of groups with negative stereotypes associated with them to perform poorly when they perceive they are being assessed against a stereotyped trait.

For example, individuals who are the sole member of a racial group in a department experience high levels of stereotype threat and will attribute negative, though constructive, feedback to biased motivation. Stereotype threat has been shown to cause anxiety, lowered performance expectations, and reduced effort, self-control, memory capacity, and creativity – all leading to distraction and loss of motivation.

Understanding the impact of leadership bias on the talent pipeline

An inclusion initiative starts with the leadership team, including managers. Although training at the individual level alone is not enough to address systemic racism, it is the foundation for important change efforts at other levels in the organization.

Because of the power of leaders and managers to shape the performance and success of those who are subordinate to them, their bias and stereotypes can have a significant impact on an organization’s ability to recruit, retain, and advance talented Black, Indigenous, and People of Colour.

The BuildForce Respectful Workplace Online Toolkit provides three tools based on the proven practices of respectful and inclusive organizations to help address systemic racism: the Online Self-Assessment Tool, a Policy Framework and Implementation Guide, and the online course, “Working in a Respectful and Inclusive Workplace.”

The management Self-Assessment Tool provides a blueprint to identify and re-work systems affected by unconscious bias.