Building a foundation of respect - Part 66

Does your organization develop the leadership skills necessary to foster psychological safety? 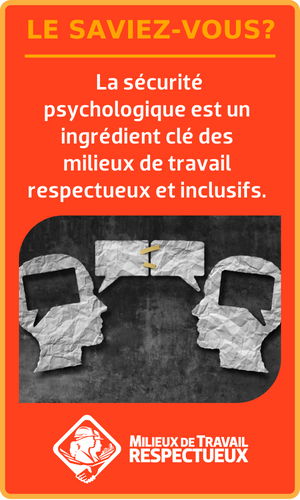 Research shows that there’s a link between higher engagement, innovation, and productivity and an inclusive workplace climate in which workers feel safe to speak up.

Speaking up describes the back and forth exchanges people have at work, from volunteering a concern in a meeting to giving feedback to a co-worker. However, speaking up will only occur in workplaces where it is psychologically safe to do so. This is especially true for members of underrepresented groups who face barriers yet report that it’s not safe to talk about their experiences for fear of embarrassment or retribution.

In her bestselling book, The Fearless Organization, Amy Edmondson elaborates on her research that psychological safety is necessary for creating organizations that innovate, reduce mistakes and errors, and open the pathway for excellence. Psychological safety refers to the experience of feeling able to speak up with relevant ideas, questions, or concerns.

Edmondson has also found links between inclusion and psychological safety. Many organizations recognize that valuable insights can be gained from the demographic diversity in their workforce. However, Edmondson found that in order for organizations to gain value from demographic diversity, there must be both a positive climate for diversity (i.e., inclusion) as well as psychological safety. These links were stronger for racial minority workers than for white workers. This suggests that psychological safety may be playing an especially crucial role for racial minorities in creating engagement.

Edmondson has identified three inclusive leadership qualities necessary to create a climate of psychological safety: inclusive leaders are approachable and accessible, they are willing to accept the fact that they don’t have all the answers, and they proactively invite input from people at all levels in the organization.

In psychologically safe workplaces, workers know that their manager wants to hear from them. These managers acknowledge the fact that they are fallible and proactively invite input (as discussed later), but most importantly, they express appreciation for the input, no matter the quality. When workers speak up, a manager’s initial response must be one of appreciation, “Thank you for bringing up that issue.” Only then should the manager give feedback, explain the subtleties of the given situation, or probe further.

A manager’s conscious efforts to be approachable and accessible may be especially welcome to members of underrepresented groups who experience exclusion and barriers as a result of unconscious beliefs and behaviours. Readers will recall that conscious efforts are required to recognize and overcome unconscious habits (see blog #49 for an in-depth discussion). Managers who consciously make efforts to be approachable and accessible are more likely to overcome any unconscious bias influencing their behaviours.

2. Willing to acknowledge their fallibility

No one wants to take the interpersonal risk of suggesting ideas when the boss appears to think he or she knows everything. Instead, a learning mindset, which blends humility and curiosity, mitigates this risk. A learning mindset recognizes that there is always more to learn.

This may be particularly important for organizations that want to understand the experience of members of underrepresented groups. Studies show that those in leadership positions tend to underestimate by 10 to 15 percent the bias in recruiting, retention, and advancement reported by members of underrepresented groups. Managers who are willing to admit that they don’t know everything will be more likely to appreciate different perspectives.

3. Proactively invite input from those at all levels in the organization

This is purposeful probing to learn more about an issue, situation, or person. The foundational skill lies in cultivating genuine interest in others’ response. This can be difficult because all adults, especially high achievers, are subject to a cognitive bias called “naïve realism.” This causes us to believe that we are seeing life objectively, when in fact, we have a subjective view of reality, based on our own experiences. As a result, we often fail to even ask the questions.

Organizations that want to address systemic barriers need to hear the reality from those experiencing the barriers. Especially because managers tend to be members of an in group, and they will not have opportunities to learn about those barriers unless members of outsider groups are actively encouraged to inform. Edmondson points out that one of the greatest dangers for leaders is that people aren’t telling them the truth. Leaders must constantly seek input, and ensure that people feel safe to do so.

Inclusive leadership practices foster a climate in which workers feel safe to speak up with ideas, questions, and concerns, which in turn leads to higher engagement, innovation, and productivity. This is especially relevant for members of underrepresented groups who often report that they are not included in important discussions and decisions. Psychological safety is a key ingredient in a respectful and inclusive workplace.

To learn the skills necessary to create a climate of psychological safety, leaders and managers could consider participating in any of the tools in the BuildForce Respectful Workplace Online Toolkit. All of these tools provide information on recognizing and reducing barriers to inclusion, encouraging the participation of members of underrepresented groups, and developing inclusive leadership practices.