Building a foundation of respect - Part 61

Does your organization help leaders and managers to create a climate of manager openness and feeling heard? 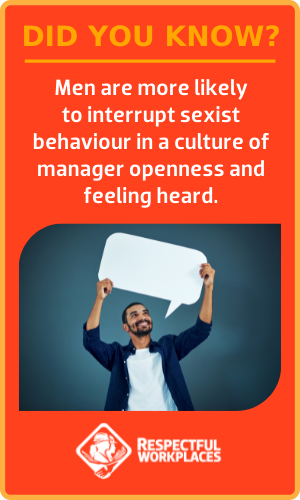 Many organizations around the world are working to address bias, stereotypes, and discrimination toward women, yet progress is slow. Our readers will remember that the root of the difficulty in reaching gender parity lies not only in identifying how bias, stereotypes, and discrimination may be influencing people processes but also in re-working those systems to interrupt or reduce gender bias. (See blog #60 for an in-depth discussion.)

However, bias and stereotypes are also expressed in the day-to-day interactions between individuals in the form of jokes, comments, and behaviours. These behaviours are often spur of the moment, subtle, hidden in a joke, or spoken amongst an in-group, but overheard by others. Formal policies and procedures may not be sufficient to interrupt them, and instead rely on the intervention of those present to interrupt and discourage them.

Bias and stereotypes are the foundations of sexism. It rationalizes the discrimination, mistreatment, and objectification of people based on their sex, gender or sexual orientation. Sexism can take different forms. Overt sexism is intentional, visible, and unambiguous. With covert sexism, incidences are subtle, hidden in jokes, or spoken and quickly passed over, but nevertheless can have physical and psychological effects that undermine efforts to create an inclusive workplace.

Sexist comments and behaviours are a reality for most women. In a 2019 European study of more than 5,000 women in five countries, researchers found that 46% experienced sexism in their workplace at least once in the past year, and of those, 26% experienced it repeatedly. This included being exposed to whistling, rude gestures, or comments or suggestive looks.

Statistics Canada found that 25% of women said that they had been personally targeted with sexualized behaviours in their workplace. However, the researchers also found that almost half (47%) of women working in occupations historically dominated by men, such as trades, transportation, equipment operation, and related occupations, experienced these behaviours at work in the past year.

Men are uniquely situated to interrupt sexism, as they represent 50% of the global population and maintain the majority of leadership and power positions. It’s essential that they participate in the work of interrupting sexism.

Men can be powerful allies, but a "speak-up" climate in the workplace is required

Men can be powerful allies to call out colleagues who exhibit sexist behaviour. However, research has shown that many men espouse commitment to gender equality privately. They express anger at the possibility that their mothers, wives, and daughters might be treated unfairly, harassed, or assaulted, but when they witness sexism in the workplace, many will not act.

In a study by Catalyst, researchers found that the overwhelming majority of men (86%) say they are personally committed to interrupting sexist behaviours when they see them in the workplace, but only 31% feel confident that they can effectively speak up. The study found that for many men, the costs of calling out a colleague are associated with an organizational climate of silence that punishes those who speak up.

A climate of silence is an environment in which workers feel restrained from constructively speaking up about organizational or work-related problems, concerns, or challenges. Whether or not this climate of silence is created intentionally, it disables men from becoming agents of change. When speaking up is not encouraged by those who hold power in organizations, men are more likely to remain quiet, behave passively, or react in unconstructive ways when witnessing sexist behaviour.

Furthermore, a climate of silence flourishes when there is a sense of unease and fear that people who speak up will be penalized. As organizational silence increased, men were 50% less likely to be committed to interrupting sexism and 40% less likely to be confident in their ability to do so.

Manager openness is defined as the quality of showing interest in and acting upon employee ideas, views, and suggestions. In a speak-up climate, men are twice as likely to feel heard at work, and men who feel heard are in turn almost twice as likely to say that they would directly interrupt a sexist comment. Feeling heard is the belief that your views about your job and workplace are considered in decision making, by your manager and the organization in general.

How to create manager openness

There are skills and behaviours that leaders and managers can develop to help workers to:

A workplace climate of openness where workers feel heard contributes to a speak-up climate that empowers men to interrupt sexist comments and behaviours. The support of men in the day-to-day work environment will be a significant factor in helping organizations to address bias, stereotypes, and discrimination.

Leaders and managers who are committed to creating workplaces where workers know that their ideas, views, and suggestions are valued should consider taking the Working in a Respectful and Inclusive Workplace online course. It provides information on creating a workplace where everyone feels welcome and supported.

The BuildForce Respectful and Inclusive Workplace Toolkit provides a suite of tools based on the proven practices of respectful and inclusive organizations: